That is one of the greetings in one of my favorite new sets "Peace Within"…what do you think that means?  I think it means, that someone can be beautiful/happy/peaceful on the inside and that makes them beautiful on the outside, even if they are not beautiful in what people think or perceive to be beautiful, as in looks.  Cause sometimes there have been beautiful people and they have not been beautiful on the inside.  Gee, it's a good thing they used the English Proverb and not my definition, or we would have needed a huge block to stick that saying on eh?  I remember this guy on my bus in school, and he would pick on me, twist my neck and leave a hickey like mark, he would say "beauty is skin deep but ugliness goes right to the bone"….isn't that horrible?  A year or so later, he asked me out…..I think the teasing was his way of having a crush or something……men….and they say women are hard to understand.  I have this magnet and bought it just for Jeff and I love it it says " I didn't say it was your fault, I said I was going to Blame you"  ha!!

Have you ever met someone for the first time, but before you met them, someone else told you a bit about them, so you kind of already feel you know them, or have an impression about them.  I remember when Jeff and I were dating, and I had not met his family, so when we were in winter quarters in Florida we went to his hometown in Illinois by train to surprise his folks for Christmas.  I think just his brother Tim knew we were coming.  Now Jeff has a little sister Patty, and she used to be a nail technician.  So when Jeff would tell me about his family, (side-tracking here… oh and the rules of the states by the rules of young Jeff…girls shave their legs all the way up…not just to the knee in the US)…since I was from Canada, and only 18, well seems I was doing it wrong…but you kinda needed that extra hair for warmth, and well maybe that is too much information…anyway it is funny when I think back.

Ok I got off topic, so anyway, Jeff told me his sister had really long finger nails.  So Tim picked us up at the train station and took us to Jeff's parents. Well the kids had gone together to buy a safe and Jeff stayed outside to unload it.  I think Tim came in the house with me, and didn't introduce me..or maybe he did, but they didnt really know who I was cause of the surprise. I just kinda looked around (this is before I started wearing hearing aids…I really don't know how I survived without them when I look back), so I noticed this one girl and I thought that must be Patty, and then I looked at her hands, and the nails were bitten way back to the quick, and I thought nope, and she wasn't super friendly (still forgetting they have no idea who I am).  So anyway we sat on the couch, and made small talk, and finally someone said something about Jeff, and Mum Gibbs jumped up and was like "Jeff!", and then Jeff came in and they were so happy, and then Mum looked at me and she said "that is who you are, I have mail for you"…my family had been sending me letters to Jeff's house…ha!  Wow that is like 26 years ago….where has the time gone?…and what the heck lead me to this story?  Ha!

Oh the beauty and peace…ok….well anyway…wanna see this beautiful card I did?  I can say that, cause well I emailed it to my BFF Tracy and she liked it.  And this stamp set, you can not mess it up.

I might have to do a little video tutorial on how to get this look, it is kinda a sepia/bleached look.  I need to get all my paper cut for class this weekend, I had to run to town to buy more frames, my Trilogy girls signed up at the last minute and are going to do a private class, and I needed more frames…oh and I need to do a video tutorial for UStamp!!!

Here's the card, this is the card I am doing for my new catalog swap I am hosting with my downline and some of my sidelines….I'll stop jabbering now…

My ever changing sansodor oil holder…I still have it in the candle lid, but someone said add a sponge, so I cut a stamping sponge so it fit inside, and flush with the top and I added my oil, then I just touch the tip of the stump to the sponge and it soaks it up.  I will let you know if I continue to like it.  Also people have asked me "do you have a stump for every color?" no I don't in fact, I let them dry and before I use them the next time, I sharpen and remove the color on the end by rubbing the end on sand paper, or you can use a nail file….fresh stump!!! ha! 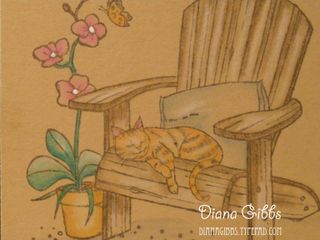 Here is a little closer up of the kitty. He looks like he is smiling eh?

Maybe he was into the catnip and has a bit of a buzz….ha!

Have a super Thursday, and thanks for stopping in!