So when I was pulling out stamp sets to do the PCP sketch, I pulled out these two retired old favorites. I am glad I did.  I got a phone call from a girl friend last night, Amy (hey sweet cheeks), and she invited me to go to a movie today and surprise two of our other friends, Robin, who I have not seen in forever, and Melissa my fellow vampire lover partner in crime. We are both vampire freaks...anyway.  So we were gonna go see "The Ugly Truth" and we even all bought our tickets.  We went to eat at Johnny Rockets and got gabbing about movies we wanted to see.  Well we talked about "The Hangover" and Melissa and I were both, "oh we want to see that" and we were even thinking we would go see it after "The Ugly Truth" we checked the times to see if it would work and then I think Robin or Amy said "why don't we just switch our tickets", so we did, we traded our tickets, and went to see "The Hangover" instead, I am so glad, it was hilarious, and I had not heard super reviews about "The Ugly Truth" movie........anyway, if you have not seen "The Hangover" I highly recommend it BUT, and this is a Big BUTT (notice spelling), there is swearing, and nudity, and stuff, but it is still hilarious...for adults!

They showed previews for the Adam Sandler movie "Funny People" which looks good, but I swear half the people in the cast were in the movie "Knocked Up"  it is so funny, how they team up people over and over.  Like Brad Pitt and George Clooney, I watched "Burn after Reading" the other night, that was a weird movie, one you had to really pay attention to, and what? is it like the 10th movie they have been in together?

We hoped for a preview of "New Moon", the second Twilight movie, but nope, there was tons of tv commercials, we almost forgot what movie we were gonna see cause they went on forever!!!

So anyway I got home, and "hopped to it" to make another card using Wendy's PCP sketch, cause it is so cute and so fast! 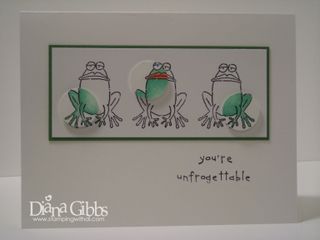 Well I don't have much more to say, as I am whooped and need to hit the hay!

The Paper Craft Planet sketch is so cool this week.  Wendy was in charge and I love it.  This is an awesome sketch and it is a super one if you are teaching a class too.  Especially if you want to show off some coloring but not have to color too much.

Here is the sketch: 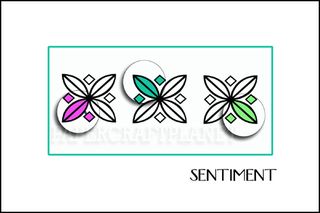 As soon as I saw the sketch I pulled out a bunch of stamp sets I wanted to try this on.  Some of them the stamped image was too big cause by the time I stamped three the card would have been too big.  But this image was perfect, and I kinda made it fun using a fancy greeting. 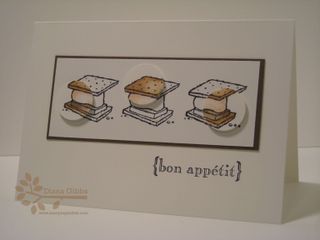 I used my stamp-a-ma-jig to get the placement of my smores.

The way I took the picture makes the smores look like they are not lined up, but when I look at it straight on they are...that'll teach me to be fancy and angle the card when I take the picture...ha!

Make sure you head over to Paper Craft Planet and try the sketch, make sure to tag it sk072509 so that Wendy can add it to the album.  Have fun and I look forward to seeing what you all come up with.
Jeff and I went on a quick date tonight, just a nice supper at Uncle Bears, they have pretty good food and it is a pretty laid back atmosphere, I ran over to Walmart afterwards cause I want to buy The Wizard of Oz and they didnt have it, not even on line, they have an Anniversary one coming out in September, so I guess I need to look elsewhere.

It wasn't as hot today as it has been but it's supposed to get back up there this weekend.  So today I stayed inside...well I usually do, with an odd potty break outside for Toby.  I worked on a fun video tutorial for UStamp, and I played around with my new set "Loads of Fun".  I love this set.

Since it has been so hot, I thought I would whip up a Christmas card, I mean it is right around the corner, and I do have a Christmas card class coming up, so I thought why not?  I don't know if we will do the exact same card in class, but I think it turned out stinkin' adorable. 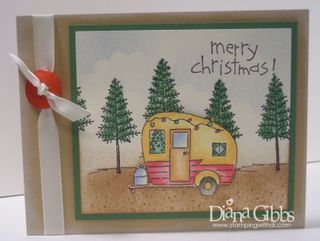 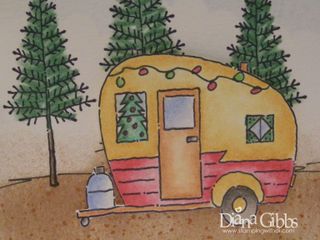 Now I wanted to make this more Christmas-y, so I took my art pen and added the Christmas tree in the living room/kitchen/dining room window, and the Christmas lights strung outside, I also added a pair of curtains in the back window, cause that is the bedroom.   I might make some of these for Christmas, I mean we do have a trailer, it is not as tiny and cute as this little guy, but it is still fun to go camping in...although I have not been in it in probably a year...bad eh?

Tomorrow I have a busy day, I need to get my TLC class designed and I have to figure out the make n take for my Trilogy girls for next week, I also have swaps to make for Convention, which is less then 2 weeks away.

But right now, I am going to clean my stamp room, put things away, so tomorrow I can start fresh.

Have a super Friday and thanks for stopping in!

One of the stamp sets I was happy to see in the new catalog was "Home for Christmas" this set was in a past mini catalog.  I love the whole rugged look of it and, well it is a great set to color.

Coloring it on our new Texture Cuts Wood Sheets was a little tough but it worked.   I don't know if I will color on them all the time, but it did make a nice effect, and it cut in the Big Shot lickety split. 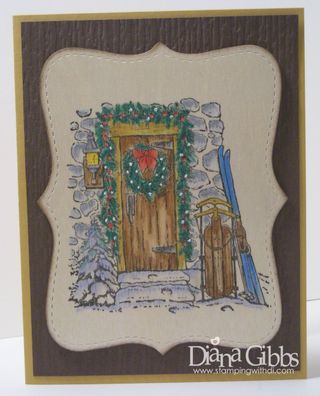 The picture makes it hard to tell that it is stamped on wood. 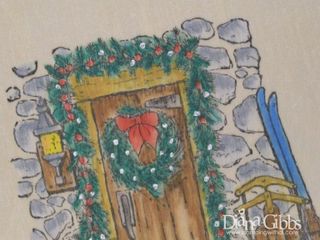 Here is a closer one, you can kinda see the wood grain, and then when I colored I tried to color with the grain.  I tried the markers, the aqua painter, and anything that has water just seemed to bleed into the cracks, I even tried a Copic marker (had to drag those out of my cupboard) and it bled too. So the pencils and oil worked the best, even though they didn't blend super well.

So tonight I was zipping the tv channels around and came upon Starsky and Hutch...the remake with Ben Stiller & Owen Wilson.  I loved that movie, they did an awesome job and the two were perfect in the roles.  I remember watching the tv show when it used to be on and I totally had a crush on Paul Michael Glaser. Who else did I have a crush on growing up...TV wise, Scott Baio when he was Chachi, Mickey Dolenz from the Monkees, Ringo from the Beatles, I am sure there were more. It is funny to think back.  I subscribed to Country Weekly a while ago, and then they stopped delivering them to the mailbox, so instead of refunding my money they finished my subscription with Star, I don't know half the people in the darned magazine.  I must be getting old.  Star is NO Country Weekly.

I love the country, now I say that and I am kinda sissy-fied.  I mean I don't like to walk in the tall grass and stuff cause of ticks, and I'm not one for walking out in the desert cause of snakes and poisonous stuff.  I don't like to get my hands in dirty stuff, and I don't like germy things.  But I consider myself a country gal.  I am more comfortable in a pair of jeans and boots, although now it is too hot for boots, so I'll settle for flip-flops, or if my back gets acting up I have to throw on my sneakers.  One of them has a little lift in the it to help my old hips balance out...aint it fun getting old?  And I need to ask my doc about menopause, cause I wonder if I have not been having some hot flashes lately. Yeah its been 115 degrees but I still feel warm at times...today it seemed like it was my legs....maybe it was cause I had on jeans....

So back to the country, there are some awesome new country-ish sets in the catalog and one is even a level 1 Hostess set.  When I was at my sister Jacqui's house a few years ago I found these cute little books at the dollar store, they have the best store there called "Dollar-ama" they have some kick butt deals.  So I bought these little books and never did anything with them.  Except put them inside the cute dollar boxes that I got there too...ha!  So when I was doing the sepia technique I was playing around with this set, and then I was like what will I do with this cute image now that I got it colored all up? So I slapped it on the little baby book and tied some black gingham on the edge, and lookee at the little bookee! 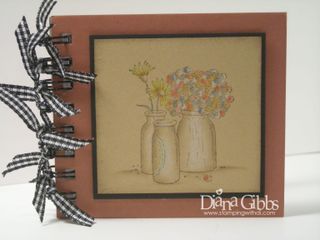 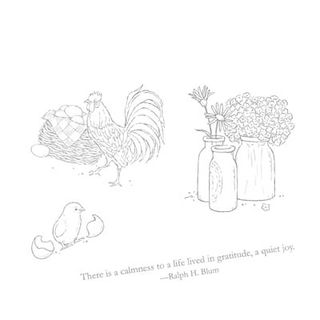 So talking about country stuff I lived in the country growing up, surrounded by farms and stuff, but at the same time things still make me go hmmm??? Eric had the movie The Barnyard on one day and the main character is called Otis and he was a boy cow and he was black and white which are the milk cows right? And he had udders, now why does the boy cow have udders?  I mean a few times during the movie I think he used them in a funny way (I didn't watch the whole movie) but it left me wondering. Any help would be appreciated...ha!

Well I have a swap to get finished, so I will sign off and call it a night!

Have a great Wednesday............2 more weeks and I leave for Convention, I am so totally trying to wrap my head around that...holy moly! Lots to do before then!