…well it seems kinda magical, cause it tricks your eye a little bit.

I wanted to show one of the cards that the girls will be doing in my TLC (Technique Lover's Club) Class 2.  This is a technique that I showed a card for a while back with the Easter chick and I made it into a baby card.  I learned how to do this at a class that MAMMa taught, (added: MAMMa learned it from Elizabeth) now of course I can't find the post.  I hope it shows up in the little Linkwithin thing on the bottom and if it does, I will fix my post and add it.  added later: thanks to my BFF Tracy, she found it, AND corrected my spelling too…must have been tired last night…so here is the chick card and the other post. I wanted to use the set Under the Stars cause I have kind of abandoned the dear old bear for quite a while, so this card shows that he is trying to show off so that I won't let him collect dust in my stamp cupboard any more.  He is juggling the skeeter spray when he should be using it on the skeeters, look at poor old racoon trying to hide by the bear so he doesn't get all eated up by the skeeters. 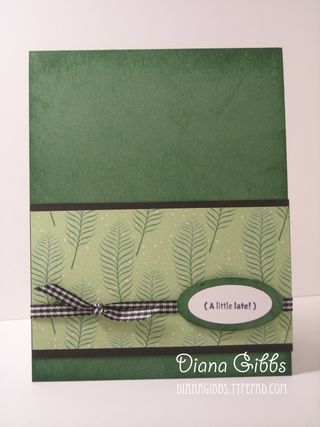 Now this is the front of the card…nothing fancy here, nothing magical…the magic happens inside.

I left the front kind of plain cause I am thinking you would probably, maybe give this card to a guy.

I did use a saying from "On your birthday" on the front.

It will make more sense once we open the card.

Stamp Set: Under the Stars

Now the magic is hard to see, the bear, racoon and sleeping bags pop up when you open the card, and the skeeter spray cans are actually floating in the air as the bear juggles them…cool eh?

So I got a nice call today from a fellow Demonstrator, and I am gonna send out a "Hey there girlfriend to Memphis Robin" – there now you have to comment. Ha!  See you at Convention!!!

A bunch of people tell me to switch from Internet Explorer over to Firefox, and that will stop that stupid abort operation error message, and I am so tempted to do it, I just hate changing my computer, I am a worry wart when it comes to that. So we will see if I get the guts to do it or not.  My sister Jax (the computer guru) says to do it.

Oh and any of you that use the RED antifreeze in your vehicles..ask your mechanic if you should be using it!  Or maybe it is just an AZ thing I don't know.  About 2 months ago Jeff put the red stuff in, it is better for the environment or something…well the other day his truck overheated and he had to take it to the shop.  The red stuff was sludge, and totally ruined his radiator, so he had to get a new one.  $425.00 later…I think the red stuff company owes me some moolah!! It's back to the old green stuff.

Well that's it for me folks, got a busy day tomorrow. We were gonna go to a movie, but with the truck expense, we are thinking staying home might be better. Ha!