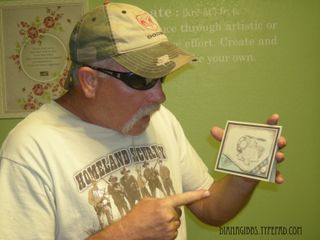 Look at that face!  He said in all my 10 years of being a Stampin' Up! Demonstrator no one has ever brought him a card…I am thinking can that be right?  I don't know, his memory is better then mine.

So after he opened the card, he had to bring it to me to read it, poor man never did finish highschool…ha! Just kidding.  He can't read without his glasses, and he is always setting them down and having to look for them. So I told him it said " Dear Jeff, you are the luckiest man to be married to Diana, you must smile every day when you wake up. Love Ellie and Ed".  Ellie told him to go put on his glasses and really read what it says.  Ruth said that she should have wore her high boots, cause it was getting a little deep in here. Maybe I gotta get my eyes checked, I could have sworn that is what the card said…oh well! Ha!

Here is the card close up, I love all the details in it, and she was so excited making it she forgot the recipe, just know it is made with love by Ellie Wilkins. 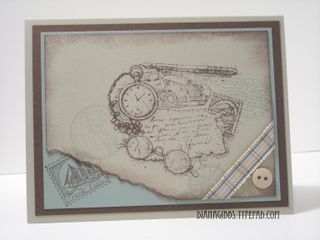 Love the ginghamy ribbon on the edge, and it is such an awesome "man card". Jeff loved it!!

Not to be out done by that old man of mine.

Ellie had sent me this card that has been sitting on my desk with other RAK's that I have gotten and need to take pictures of, this one she put a recipe inside.  It is so pretty too, she's is full of talent "my" Ellie. 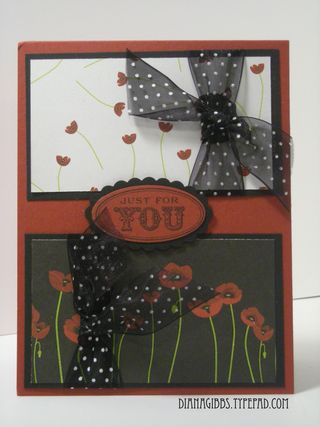 Aint this the prettiest card?

If I knew how to make a watermark in my photoshop program I could make one with Ellie's name on it.

So whenever I don't make a card or just post a picture I just put the old blog address on there.

So today while I was cutting paper, I put on the TV, the cable company somehow after 2 weeks realized there was something wrong with the line, and had to boost the whole line not just my house, so now the tv and the modem work at the same time…now that I have said that out into the universe, you know it's gonna mess up right?  So anyway I had Days of Our Lives on and I have not seen it in weeks, the last time I seen it Rafe was gonna adopt Grace, so was I totally surprised today to see that Grace had died…what the heck happened?  So if anyone could tell me I would really appreciate it.

Well I am going back to cutting paper, have a super Tuesday, and thanks for stopping in!