…or should I say Studio Cleaning.  So today after I got back from the PO to mail the swaps, and the new catalogs, (don't forget today is the LAST day to order out of the current catalog.  The new one starts tomorrow, the 1st, at noon)  I thought I really need to do some cleaning, purging and dusting.  I think it is also called procrastinating, as I had some other stuff to get done, but hey, there's always tomorrow right.

So this morning pest control came to sprinkle stuff in the house.  I wrangled my first scorpion of the season the other morning, so wanted them to come and sprinkle stuff to hopefully get them.  We always toss the pillows off the bed when we go to sleep and then when I make it in the morning, I pick em up and bang em together just in case before I put them on the bed.  So the other morning sure enough I picked up the pillow…well hello Mr. Scorpion, of course I had just taken off my flip flops, not that they would kill him on the carpet, they are pretty hard buggers to squish.  Luckily I had thrown Toby up on the bed, since I had been headed to the shower.  So he ran under the dresser, so I went off to get the fly swatter, and I was dragging it back and forth under the dresser trying to get it to come out, it did just a bit and ran back under. So I went to get the flashlight, took two different ones till I found the one that the batteries worked, cause no way was I not killing this sucker.  Toby is too small and I am afraid a scorpion bite would be lethal to him.  So I laid down on the floor with my flashlight and my danged old tri-focals, it's kinda hard to wiggle your head up and down next to the carpet so I could find just the right dang spot I can see out of, but there he was up against the back wall.  So I got the yard stick, and squished him and cut his tail off and killed him.

So tonight I was walking from the living room and I passed the front door and saw something down by the threshold and up the door a bit, and I thought crap, a scorpion, so I took my foot and tried to hit it but it hopped down, thank goodness I missed, look what it was…

…aint he sweet? So Jeff and my BFF Tracy both said, oh is it one of the babies from under the treadmill?  I sure hope not.  Jeff said he saw a little one up front the other day, so I am sure he just scooched in tonight when the door was open. 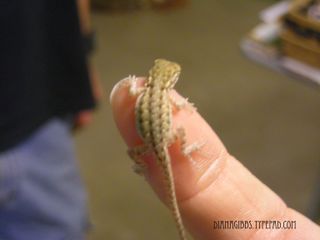 Here he is on the tip of my finger, I so wanted to keep him, he got pretty tame after a while, when I let him go, I really had to coax him OFF my hand.  But outside is better as he would die inside, cause what would I feed him?

I am glad that American Idol is replaying the Micheal Jackson songs they sang during the contest.  I watched The Jackson 5 movie on tv this weekend, and boy their Dad was a real creep. At least the movie made it appear so, he was so mean to those kids, no wonder Micheal had issues as an adult, he was never allowed to be a kid.  Such a sad story, cause he was truly talented in his days.

Well I am off, I still got some more tidying up to do.  Have a great Tuesday, and thanks for stopping in!