Well it kinda looked like a crocodile, and maybe it means I need to vacuum more. I don't know, but today I was vacuuming, and I lifted the treadmill walking platform so I could vacuum under it and look what I found… 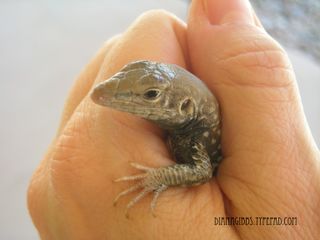 Ok, well he's not really a baby crocodile. But he did surprise me, I mean, I was not even going to lift the platform up, so I had one hand on it lifting it, and it is pretty heavy doing it with one hand, and the other hand had the vacuum, thank goodness I didn't lift a little and just vacuum under, as this might have been a sadder story.  So anyway, up the platform goes all the way and there he was curled up, and I was like oh I hope he is not dead. I quickly turned off the vacuum and bent down.

So when I went down to pick him up, he tried to get away, and then I quickly scooped him up, he just wiggled a bit, and tried to get away. He could not have been in the house long cause he was pretty healthy.  Eric keeps leaving the dang doors open.  Yesterday before class I come out to the studio, and the door is open. Thank God it was only a lizard that got in….(shivers). So I am thinking a day or two at the most he was in here. Poor thing. 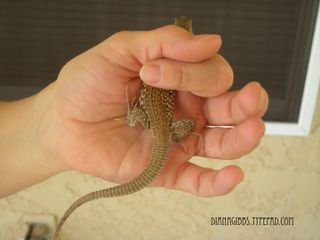 Luckily I didn't scare him enough to make him drop his tail off, cause he had a good lookin' tail. They will drop off their tail as a way to get away, so the critter chasing them will chase the tail as it flops and flips and they get away, then they grow a new one. Gee wouldn't that be nice to do…my tail is old and droopy, I'm gonna drop it off and grow a nice toned firm one…oh and my belly and boobs too.

I took him outside to show Jeff, (Jeff is smoking a brisket) so he is sitting out manning the smoker, as it smokes next to my new screens – yeah let's not go there.

So the lizard wanted to check out Jeff's tat, so he could know the proper spelling of my name when he sends me a thank you card for sparing his life from 1) the vacuum, 2) Toby 3) death by starvation. 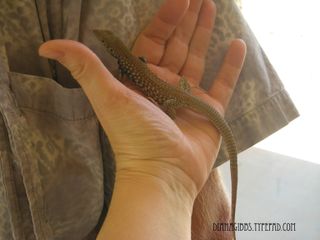 Jeff wanted me to put it on him like I had the gecko that time, I think if I had of handled him a bit more he would have been more apt to stay longer like the gecko did, but he was so happy to be free, he jumped down and is now happily crunching on bugs under the trees in the back yard.  Do you think he will remember me next week?

Well that was a quick post for today, I have class tonight, so I know it will be nice to not have to post when everyone is gone, I can clean up for the morning class, and go to bed early.

Have an awesome Monday and thanks for stopping in mates!