So about a month ago I made a surprise trip to Canada, only a few people knew I was going so that I could show up at Victopia and surprise Vicki and everyone else.  Last November, Vicki and I were trying to figure out how to get me home to surprise my sister Jacqui and the times and flights were not good, so Jacqui and I turned the tables on Vicki and surprised her.  I think I told the whole story in an earlier post, it was a blast and I had the time of my life. Vicki was totally surprised and almost peed her pants when I came up the stairs at her house, I wish we had of videotaped her, but then she would have known something was up.

While I was waiting in the Phoenix airport to board my plane, a family came to sit down beside me, I scooted over a seat so they could all sit together, so then I got chatting with the Dad.  He was telling me where they lived and all that, he was a little hard to understand…me and my deaf ears and his accent, but I got most of it.  He offered me a stick of gum, and I had just spit mine out a bit before, so I said no thanks.  About 5 minutes later, his son opens up this humongous bag of home made cookies, and the Dad takes one, and then the Dad offered me one, and I said “no thanks”, well he got a sad kinda look on his face like maybe I had offended him, so I didn’t want to hurt his feelings…now most of you that are constant readers know I have a well…umm…germafobe…freaky thing going on. So I stuck my hand in and took a cookie, they were really cold like they just came out of the fridge.  I took a bite (the whole time thinking…do they have cats? and if they do, do they climb all over the kitchen counters? did they scratch their bum while they were cooking? If they did, did they wash their hands after they scratched their bum? Did the milk sit on the counter one day after breakfast and got warm before someone noticed and put it back in the fridge?) You know, normal things that go through your head when a complete stranger offers you a homemade cookie out of a humongous bag….So anyway, I am chewing away, and the cookie was pretty good actually, so then the Dad says “They are made with dates and nuts inside.  Dates never go bad or get old, flies can get on the dates and (I swear he said poop…my ears heard poop) and they still don’t go bad, they are disease resistant. Now I am thinking as I put the remainder of my cookie in my mouth, thinking was that a little bit of fly poop I just ate? I was also thinking, if I die from fly poop poisoning will Jeff re-marry right away? or will he be so sad he does not get out of bed for a month? What about Eric, he will be graduating and I will miss it…and little Toby, I was going to miss my family so much…but I survived, not even a belly ache, not even the dreaded diarhea twinge.  When I told Sharon the story, she said I should have said “I have a nut allergy”. Why can’t I think that fast? From now on whenever I don’t want to do something, my response will be “I have a nut allergy”.

So while I was home, I think Kristi (she owns Hanna Stamps!) ate the best out of all of us, and I mean the healthiest, I was eating chocolate bars, chips, and face pullers.  Anyway, Kristi had this purse that I swear was magical, I never saw her put anything in it, but yet, she was constantly pulling food out of it, health bars, apples, you name it, she would reach in, and there was an apple, she would say “there are more in there if you want one” I was scared to look inside, I mean it was magical, what if I stuck my hand in and fell in.

So (I think I use the word so too much), anywhooo while we were traveling to Vicki’s my sister had the whole trip planned, we were gonna hit all these different stores to break up the day. Here we are in front of one store, (this one was when we were with Vicki) that really should have a sale once in a while, this store was so full of stuff, you could not find anything. 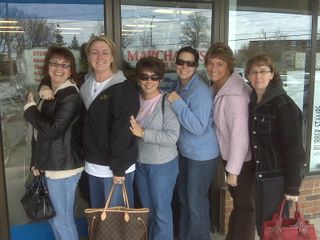 Me, Kristi and her magic purse, Tami, Donna, my little sister Jacqui, and Kim

Vicki was taking the picture.

Here is the rest of the girls from the weekend, some stayed the night and some went home and came back the next day.

While we were there, Kristi asked if we would each make a birthday card for her hubby Mark, and we said sure.  Well of course I was not at home, so I used what I had, and now I don’t remember what all I used, cause some stuff was Jacqui’s, and Vicki’s.

I do know that the stamp is by the Greeting Farm and it is Cowboy Ian. I colored with Copics.

I am gonna hit the hay, morning comes early.  It was an overcast day today and it rained off and on I could actually open the door and windows for a while today. By night the a/c is back on though.