So since coming back from their honeymoon Sophie and Timber found a cute little house in the small town Mooseville. They will keep the cabin that Timber built for weekends away.  But Sophie is a nurse and needs to be in town since she is on call a lot.  This is a buyers market and they got a screamin' deal. Timber drives all over to do his log cuttin' so it was perfect for him too.

They were walking in the park the other day and saw that it was the town's fair, and the Mooseville Annual Cook-Off was ready to start, so Timber signed up right away, grabbed an apron and a chef's hat and cooked up a storm…and won!

Sophie was so happy, not only did she marry the man of her dreams, a real man that doesn't care about getting dirt under his nails, but who is still in touch with his sensitive side and watched Steel Magnolias with her, and even got a little misty…not enough for a kleenex but still his eyes were a little glisteny, but she married a great cook too. 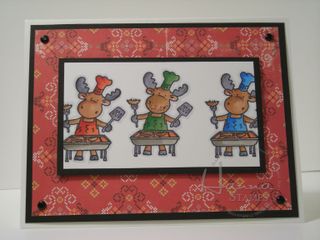 Paper: Whisper White, Basic Black, Neenah White, the Designer Paper is some I got at Jan's store when I was in Canada, and it is by Cosmo Cricket and it is called Honey Pie

I couldn't decide what kind of greeting I wanted on the front, and a lot of times I don't like to put greetings on the front or the inside till I go to use the card. I did however put Timber's trophy on the inside. 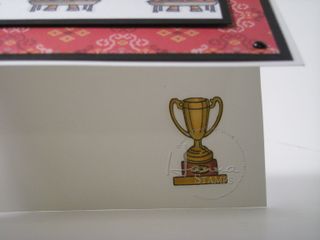 This card could say "You're number one" or perhaps "You're a Winner".

Well I am off to go try one of Timber's winning brats, I think he got the meat from the Pork Shop, so that is probably why he won! Ha!

Have a great Tuesday, I am excited for American Idol to see what they are gonna do.