This is the time of year I love, as I wash the dishes (that part I hate) but I look out the window, and I see rabbits, hummingbirds, orioles, cardinals, lizards, and today the prairie dogs were making me laugh…I sure hope they are still little (right now they are like smaller then kittens) and not eated up by the neighborhood cats so that my BFF Tracy can see them when she comes in 4 weeks. 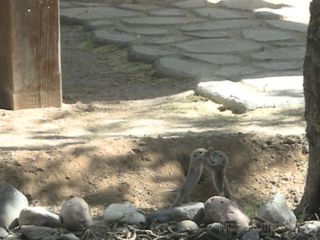 They fight and run, and unfortunately they also dig…holes in the backyard. Jeff just puts the dirt back in with some colorful language as he does it. But they are so funny to watch and you can see them learning as they grow.

Look at these two duking it out. Pow! Smack! They flip each other upside down and then scamper away…or maybe they are practicing for the next dancing with the stars. 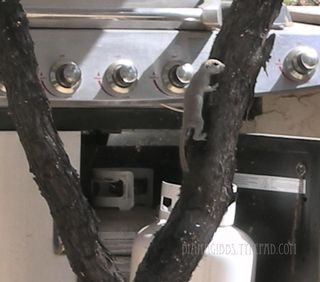 This one decided he thought the view from a little higher up would be nicer, so he started to climb the tree. He got a bit of the ways up then thought he might like to live to see tomorrow and climbed back down.

As you can see in the back we need to refill our grills tank, so we are using the camping trailer's tank till then…frugal? lazy? both?

I wish my posture was as good as this little guy/girl.

Guess what? We have a new stamp set for Molly Stamps and it's a cute one.  I saw it forever ago, it seems like (as well as some other new ones that are top secret) but this one is available now. Nanu-Nanu is what I think of when I see him.  Which reminds me at the border coming across to go to Detroit (it is cheaper to fly to Detroit then to London Ontario, so that is what I do.) So when Jacqui and I handed the border guy our passports he asked our citizenship and we are both Canadian, and he asked where we were going or something, and Jacqui said taking me to the airport to go home.  So he asked what my status was or something, and I said Legal Alien, and he said Illegal Alien? and I said no Legal, and he said darn, I thought I caught one.  Ha! He was nice. Anyway, so check out this cute set. 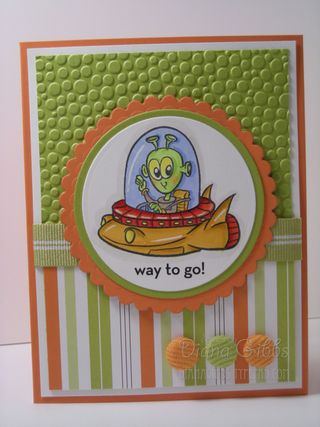 Stamp Set: Out of This World

So did you hear me scream? I was so happy that Danny stayed on American Idol, they so did that on purpose picking Chris first, gets you all worried, then Adam cause he was a given, and then Danny and Alison are left and I was kinda worrying.  I screamed like a girl when they said he stayed…yeah.  So next week will be exciting.  I was happy to see Daughtry, the song sounded like they needed to practice it a bit more, but it goes to show you don't have to win to be sucessful from the show.  Paula, needs to practice her lip singing, and she needs to check the birthdate on her licence, she is beautiful but she needs to act her age…don't yell at me for saying that.  I also was like what was up with her boob cleavage big divot thing after she changed and before the freaky girl with the white hair sang? Does that mean she has fake boobs and they got misaligned when she had the other dress on? She did get dropped on her chest into the guys arms…What was up with the guy with the tutu and the black lips…I am such an old person I guess, and don't understand these young people today.  Over all I was happy with the results, and the 3 I voted for continued on.  Last night when I voted Chris and Adam's went right through, but Danny's was busy and I had to redial so that tells you something.

So I whipped up some salsa the other day, it is my friend Ruth's recipe…I don't think I have put it on here before, if I have I apologize, but it is so simple and so easy…plus I want to try eating nothing but fruits and veggies…detox myself.  So I think Salsa would be good.

Doesn't it look yummy? So I need to ask my BFF or my sister, I think if I scramble some eggs for breakfast and put salsa on it that would be ok…right?

Here is how easy it is.

1 bunch cilantro – chopped…I dont use the stems, or at least very few

1 jalapeno, seeds and all but not the stem. A little tidbit of advice, only add half and then try it, you can never tell if one whole will be too hot, and I am a woose when it comes to spicy…ask poor Vicki who made spaghetti at Victopia and Jax was my taste tester and told me I couldn't handle it…so I ate the awesome salad and delicious garlic bread she made, and that was plenty…

Pour can of tomatoes into blender.  Cut cilantro, onions and jalepeno up.  I use the pampered chef dicer dohickey to get them cut small. Put all this into the blender. Add your garlic.  I stir it up with a spoon to help mix it, and then turn on the blender a few times to mix it up. Put it in a sealed container and store in refrigerator.

Let me know what you think?  It lasts about a day and a half in this house…ha!

Have a great Thursday, and thanks for stopping in!