Hard to believe our little boy has graduated.  He really graduated a few months back when he had all the credits he needed and has been working ever since.  Eric has learning disabilities, so we were so lucky when the school helped us find him a job. 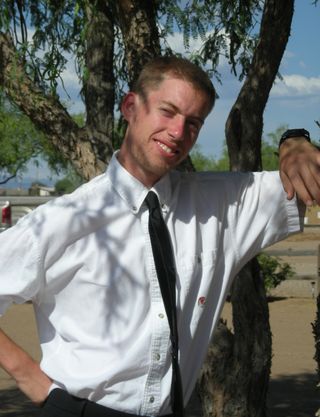 We took a few pictures before we left for the ceremony.  This is out in the front yard, under the mesquite trees, I love this picture of him. I knew that it would be hard to get good pictures of him during graduation, my camera only zooms so far.  I had never been to a highschool graduation before (I was working and not able to go to mine), so I was pretty impressed.

It was so sad when the two students that passed away this year their parents accepted their diploma's, that is when I started to cry, I can not even imagine losing a child, at any age, and one just starting his adult life, it was so sad.

I also cried a bit afterwards, it seems after the ceremony is over and the kids have thrown their hats, we go out on the football field, and I was like "what? why?", and Jeff says "we just do", so off we go, he grabs my hand, and we start looking for Eric amongst all these hundreds of kids and their families doing the same.  I saw a few kids that Eric graduated with, and we kept looking and looking, and then finally Jeff said "hey there he is", and just seeing him standing there holding his cap, all dressed up, he is such a handsome man, and it makes me sad to think of the what if's…what if Eric was a regular kid with no disabilities? would he have a steady girlfriend? would he be going to college? what if Eric was moving out about now? what if, what if, I mean I am sure we all do it, no matter what age our kids are, and whether they have a disability or not.  Sometimes I get mad, cause of the hard times Eric will have as we get older, and when we are gone.  But I also am so very thankful and I thank God every day, because Eric is considered one of the high functioning at work as he was in school.  There are many more young people that have it harder then Eric, and we are blessed he is generally a good kid…heck he has his moods, but don't we all?  I sure do, and to be honest those are usually when Eric seems worse cause my patience and Eric's are about the same…very slim at times.  Jeff is the best, cause he just goes with the flow and takes it all in stride.  God knew what he was doing when he put us all together, us 3 make a complete, not perfect, but a very lucky family indeed.

Wow, listen to me blabber, this was to be a happy post, and it is, sorry about that…let me get back on track… 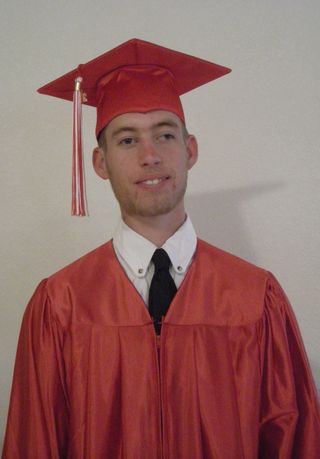 Here is Eric in his cap and gown, I have never seen him stand taller then when he had this on…he had "the strut" going on, and he totally (I think) was the best dressed out there, he followed the rules, they were told what to wear and what not to wear, and we were suprised to see some of the clothing under the robes. 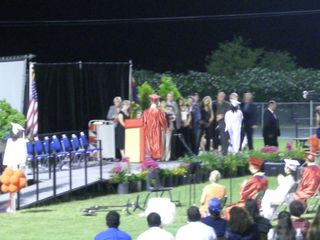 Here he is getting his diploma, see how far away it was?  I am hoping that the picture that the school photographer took will be a good one. They are to be on-line sometime, but they were not up yet.

Here they are throwing their caps in the air, Jeff said the kids went over and formed FHS on the grass first. You could not tell from the stands.

It was so funny, when we found Eric he had his cap and he put it on and said "what do you think? is it mine?" cause we told him to take the tassel off before he threw his hat.  I do believe this cap is more snugger then the one he went with, but we figured he won't wear it again…well maybe when we dress him up again, so we can get OUR picture taken with him. Can you believe it, we didn't even get our picture taken with him. I mean we didnt' have anyone to do it, but I could have propped the camera up on something. Dad Gibbs' called a few hours ago and he was surprising Eric by coming to his graduation party, he got here a little bit ago, and Eric was like so surprised, and Grandpa said "hey Eric, will you do something for me?" and Eric said "yes" and Grandpa said "will you shave for me?" and I'll be darned if he didn't, now of course the pics won't be the same cause he is clean shaven…ha!  He'll do anything for Grandpa.

Here is Eric with one of the football coaches.

Well I am getting off here, we gotta get up early in the morning to get ready for the party.