Well Ok, it is not filled with bones, it has candies in it…but there is bones on the front so that counts.

I had printed off a couple of the bags from an earlier post, and I wanted to make one a little different.  I was watching Greys Anatomy at the time and it's a wonder I could see what I was doing from crying so much.  I am going to bed tonight with a head ache cause of it.  I knew it, as soon as Denny came back something was up. That is all I will say in case you have not seen it yet.

So anyway here is my cute bag, well ok so-so cute, it was cuter in my head. 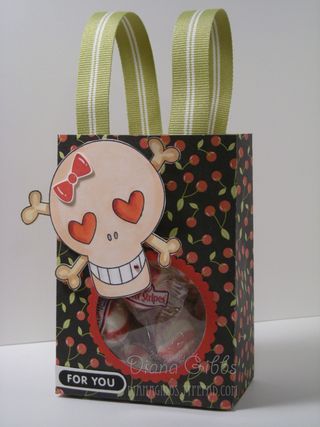 Tip:  I printed out the bag pattern and cut it out then, I folded it on the creases, and cut off the flap, then I ran it through my Big Shot with the circle nestabilities to make a hole.  I made a second hole on red cardstock the same size, and then layed the bigger scallop nestabilities over it to make the scalloped ring to accent the circle cut in the bag with the window sheet behind it.

Really it is just for looks cause you would not really be carrying around the candy the way I have it.  The ribbon is just sticky stripped in there and could be fancier but my skull is in the way…so like I said it was cuter in my head.  But it aint bad.

So I have been having issues with my cable modem that connects me to the internet, every time the A/C unit comes on in my studio, it turns off and then re-boots itself.  A few people recommended getting a battery back up surge protector. I had one about a year ago, and had it for a couple years but then it died. So I just had a regular surge on here.  So anyway I ran over to Office Max near the house to get one and a couple other things, only to find out the store is closing and right now everything is 25% off, so I got more things then I intended but things I will need down the road, mostly toner for the printer, that stuff never goes on sale.

I told you I would tell you what I was thinking about the new book I am reading "Marked" by PC Cast. I am enjoying it somewhat, it gives a whole new idea on vampyres (they spell it that way), and it is harder to get into then the Twilight series, and the Undead books, and all those others I read, but I am determined to finish it, cause I want to know what happens.  I will decide when I am done, if I will read the next 3 or send them to my pretend daughter Jessica, she is my BFF Tracy's daughter.  I got the second book from The Summoning series by Kelley Armstrong, as well as the next Undead book and those are burning a hole on my dresser waiting to be read.

I got some very nice RAK (Random Act of Kindness) cards in the mail lately and I need to take a picture and post them.  Ellie (hey girl) asked what RAK meant she thought it meant Real A** Kicker, and I said no, but it could mean Real A** Kisser depending on the kind of things people send…ha!

Well today I started a kind of diet. Fruits and veggies, and lean meat.  My BFF Tracy is doing it and says it is working.  I am just waiting for that really healthy poop she was talking about as you detox your body…maybe tomorrow…T.M.I. Di! T.M.I…ha!

Well this old gal is headed to bed. Have a great Friday and thanks for stopping in!