Just in case while I have my computer in the shop today, and they keep it over night…I will put some pictures up and let my sister comment for me..(she will comment in red)…get ready for either laughs till you pee, or from what someone said before (my hubby) when it was in the shop and Jacqui took over…boring…  well I must come up with something exciting to say cause we wouldn't want that certain someone to think the blog is boring…that just won't do!

Dad and the sheep – after his pedicure…(the sheep that is)…I think he is working up a tip "is that 10% or 20%? – he did take care of that old hang nail and I had some wicked toe jam" …the twitchy mean old thing…(again I am talking about the sheep).

Well this fella's name is Walker. I asked Dad if he was named after Chuck Norris….you know Walker….Texas Ranger….but he said no… I remember Granny used to watch Walker …Texas Ranger all the time and she just could not understand how he could get the livin' sh** kicked out of him one week and look just all fine and dandy the next week! I think if this Walker didn't cooperate more he might have got the "wool" kicked out of him…as it was Dad ended up grabbing him by two legs and flipping him on his back to finish his "pedicure" (or maybe it's a "hooficure") …he was being a little uncooperative 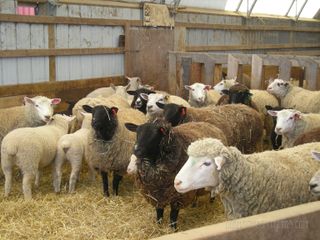 Here are a few more pics of the sheep.  Growing up we just had steers and then Courtney, my little sister decided to get some sheep, I think she was in 4H, I had moved out by then. Of course she doesn't live at home anymore, and the landlord in Markham says no to pets, so Dad and Mum have to mess with them.

And mess with them they do!! A few times some of the ewes have had 3 lambs and can only feed two, or they will not feed any of them and Mum and Dad have to bottle feed them every 2 hours! They bring them in the house and put them in a laundry basket and set it over the register to keep them warm. They are very cute when they are tiny. 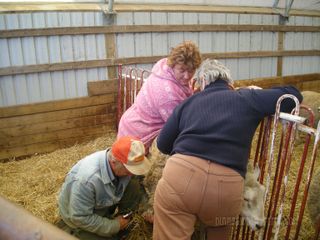 I preferred to be behind the camera, I mean look it took my sister Jacqui and my Mum to hold the bugger while Dad clipped his hooves, just think if he wanted some fancy bling on them like MAMMa gets on her toes when we get peds…I might have had to get in there too…ugh…I am such a city girl.

Yes the princess was standing outside of the pen…no chance of getting any poo on her precious little feet and no chance of getting bit by any psycho sheep. That's okay though. Diana left the farm before we really were old enough to do too much work on it. I on the other hand…and Dad and Mum are probably laughing as they read this….but I did a whole bunch of things on the farm. I cultivated, I did chores, I raked hay and straw, I loaded those big honkin' round bales and hauled them home with the tractor and wagon…..Dad reminded me a couple of months ago that I had lost one off the wagon too!! I forgot that until he mentioned it! I even spread sh**t  manure! Actually that was the best job cause that tractor had a radio so I could get my groove on when I was out in the field spreading the crap. I'm sure all the people driving down the highway were thinking to themselves…who is the beautiful creature spreading all that crap!!!! Ha ha and I'm sure many of you are saying the same thing as you read this.

Added after Jax: "OK, so this is Di now…they checked the computer, its just gonna be noisy nothing wrong with it…so I did stay on the farm long enough to:  crash the side of my wagon into the wagon Dad was hauling…he would fill it with sillage or whatever and then I would bring an empty one and take the full one to be unloaded into the silo…so there was a guy that helped us, a relative that I can not remember his name…but anyone that has worked on a farm, knows what a PTO shaft is…it is the thing that works the auger or something between the tractor and the wagon, and this thing goes 1 million miles a minute, and can kill you if you get caught on it.  I remember Mr. Ravel..was it Bernie? I dont know, he would step over that thing, with threads hanging off his pants and I would look away just knowing for sure, it was gonna catch and kill him right in front of my eyes.  I also remember using the raker or whatever and raking hay and then Dad must have bailed it.  I think the round baler came after I moved out, I just remember the square ones…Jax will correct, she has a better memory then me.  I also remember picking up rocks for weeks, walking behind the tractor with the wagon on it.  I remember picking pickles at Ravels, or they were probably called cucumbers to be made into pickles.  I also was there long enough to have friends over and I got dragged on my back on some hard dried up old manure and I have a scar on my back cause of it…ha! Memories…sing it with me Babs!!So I did do some farm work…not as much as Jax though."

OK, so just in case, I don't get my computer back, (we know I did – confused yet?) I will have Jacqui go in and add her two cents worth, and have her do it in different colors, and she better not swear…ha! oops just read that part…

Have a great Wednesday and thanks for stopping in! Chow for now, Jacqui (I keep threatening to go in and do some "Where's Waldo" posts….just periodically show up on Diana's blog every now and then!!)

Today's post brought to you by, I couldn't decide what picture I liked better… 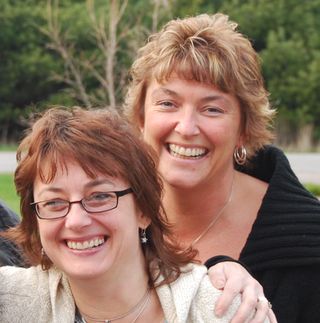 sorry to bore you with them, but I think they are funny! I love my little sister… 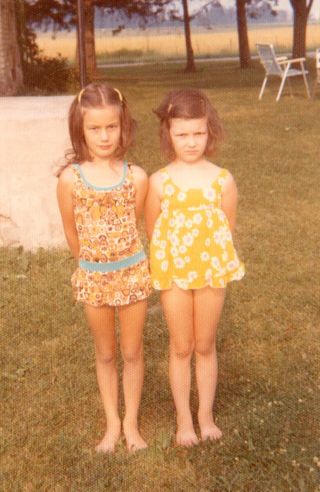 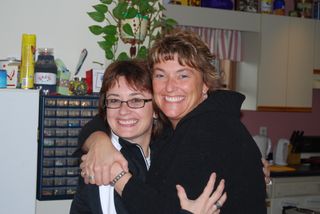 Previous Post: « Goodie Bag Winners & a Bag Challenge
Next Post: Out of This World…Out in My Backyard »