While I was in C eh! N eh! D eh! at Victopia I stamped some Riley’s at Vicki’s that I didn’t have. One I stamped is so cute, I made my card all up and I had my story all planned and then I went to find it over at Hanna Stamps! and oops it is not out yet…ha! Just wait it’s a cutie.

So this one is available, and it is also a continuation in the Timber and Sophie story. Tonight on the Hallmark channel…ok not really.

So a few of you were worried that Timber and Sophie got hitched too soon, and I explained that they actually dated for a year before they got married I just showed the wedding picture sooner then the stories…if you know me, I do leap from one topic to another pretty easily.

After Timber and Sophie had dated for a while, they earned a trip to Hawaii, Sophie sells seashells by the seashore, and she was one of the top sellers.  So off they went.  While they were there they went to a Luau, and they asked for volunteers to learn to do the hula.  Well of course Timber thought Sophie would be perfect.  She had taken dance when she was younger, and to be honest he wanted to see her in that grass skirt.  So off Sophie went behind the curtains for a quick course in the art of the hula.  The teacher motioned them all out on the stage and then next thing you know a Don Ho look-a-like started playing Tiny Bubbles and all the girls began to do the hula.  Timber could not take his eyes off his Sophie.  How lucky could he have gotten to find such a catch.  Sophie was so scared but all she did was keep her eyes on Timber in the crowd and it was like all the people disappeared except for him.  He/She knew that all they needed was each other to be happy…oh and the grass skirt…Timber had plans for that later…ha! Bad Timber. 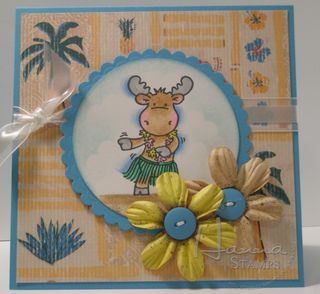 Paper: Tempting Turquoise, Whisper White, Background paper I got while I was in Canada, I think at Sheila’s store.

So it’s day 4 of questions, to win the mystery blog candy on the 28th.  Today’s question is: What is the Stampin’ Up! product that gets ooh’s and ahh’s from your friends and/or customers?  My answer: The Big Shot…even my hubby was impressed. When I was getting matchbox dies ready for my Big Shot class he was like “WOW that machine makes boxes?”  and I said “well no honey, I make the box, the machine just cuts it out and scores it..” – ha! Just like when I got my crop-o-dile…he was impressed with it, men like the big stuff…oh and Jeff took art in school like I did, so I think that is why he loves the Stampin’ Up! stuff, cause he “gets it”, he is pretty impressed with the sansodor and pencils too.

Hope you have a great Tuesday, I have to go get my teeth cleaned. Fun stuff!