So today was a busy day:

I was working on class stuff, Friday my Trilogy Scrapbook Club ladies are coming for a road trip, they will make 3 projects, and then they are heading over to Schnepf Farms for some peach pie…if that doesn't sound like the best day ever, I don't know what is.

I had some neat visitors today, and took like 58 pictures.

Eric also has a new HAB woman that started today, and she is super sweet.

So today was busy…

So I made up some quick Thank you cards.  I got this little Mini Note Kit for free last month, and I wanted to put it to use.  I love the writing looking fonts. 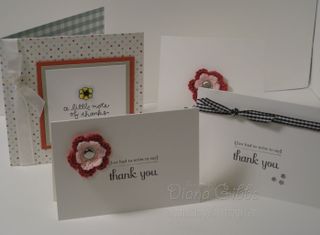 Here is the grouping of them.

Two are the note cards that come with the set, and the others are cardstock I had.

I added the flowers, ribbons, bling and brads. 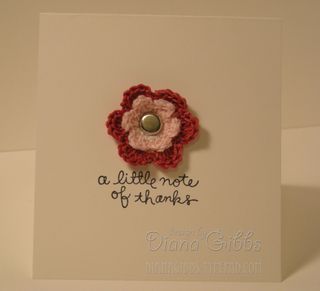 Card 1 – I added a silver brad to the Accents & Elements Fleurettes and just covered the little flower that is above the greeting.

I just attached the flower with a glue dot. 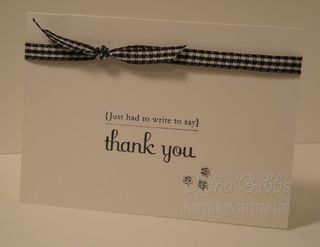 Card 2 – Just a little black gingham tied on the top, and 3 little blingie flowery things that my sister gave me and how cute is that? 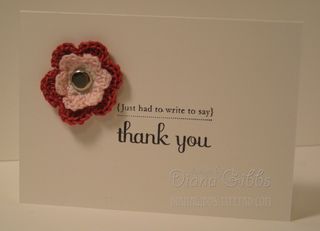 Card 3 – For this one I did the flower the same as Card 1, but I just glue dotted it off to the side of the greeting. 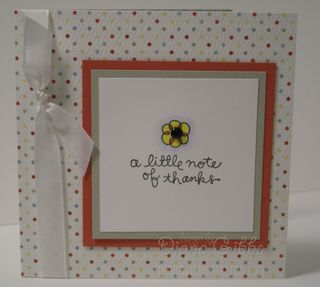 Card 4 – This card layout and paper probably looks familiar cause I have used it before. I am just using up some more of my card guts.

This one I colored the little flower with the prismacolor pencils and the solvant.  I need to practice more with them before I will feel confident using them…but I did realize after playing with them with Sharon, is you can use the SU! watercolor pencils with the solvant, and they work awesome.

So ya wanna see who stopped by today? Toby wanted out the front door and so when I looked out I didnt see anyone or anything, I opened the door and he chased something up a tree, so I went and looked at it was this…

But he does not say Beep! Beep! It was more like fast clicking sounds.

So he stayed up in the tree, and I clicked away, like I said I took 58 pictures. Now that I am using the Sports program dealie, it makes taking critters so much easier.

Here she/he is saying would you leave me the heck alone so I can get out of this tree.  I will have to look on-line and see where they live, I think the ground, not in trees, cause it didn't look like he could fly very high.

So, I think this is my favorite picture in the tree, I love how the color is so nice, and like I am peeking through. You can kind of see his little tuft of hair on his head.

So I put Toby in the house and came back out and he finally got out of the tree. He ran down the rose bushes, and went underneath so then I came around the other side and slowly walked down the row of rose bushes, and then I saw him over at the pine trees.

I was like how the heck did he get over there so fast? So I snapped some pictures, and then I thought what if that is a different one?

So I looked down on the ground and sure enough, look what was there… 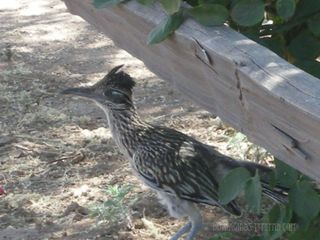 …the one from the tree. So there were two of them, so I just walked away slowly and went in the house.

Later Toby was making noises at the front door and I looked out and the roadrunner was on the front walk way.  So then I watched it go over to the water control thing, and there were 2 already at it…so there were 3! How cool is that? Well maybe not cool since it was over 100 degrees as I stood out there taking these pictures.  Yes folks we have beat the record for temps over 100…tomorrow will break the record of 7 days in a row, tomorrow will be 8…yowza and it's only May!

So let's discuss American Idol shall we?  After tonight, I am ready to get rid of all the judges, but probably keep Randy, he seems to be the only one that acts like an adult…although the blue glasses on him tonight were different. But I dont know what Paula and Simon were doing when Danny sang first when Ryan said don't put the camera on them, but they need to just grow up, and Tara…SHUT UP! already…the way she was talking back to Simon…ugh!  I was not at all pleased with the songs that they picked for the finalists to sing, I must be old but I didnt recognize any of them.  The songs that the guys picked were better, but I had never heard of Chris's song in real life, but I was wishing he had of done like Keith Urban or something country, but it is gonna be a close show tomorrow I am sure.  I did vote, and I am glad Simon said what he said about voting, it is important to do so, especially since tonight was pretty even I think in talent….I mean Adam, well Adam is Adam…he makes me smile when he starts to sing, even when he sings high and his tongue sticks out a bit, I have gotten used to that.

After it was over I turned the tv dial around and watched the Biggest Loser, if you watch it could you tell me about Helen, she lost so much weight but when she was big her breasts were huge.  Did she have them reduced to go with her smaller body? and if she did is that fair? Maybe they just got smaller as she lost weight, but what about all the skin?  Sorry I just had to ask. These people are totally awesome what they have accomplished.

Ok, well I am hitting the hay, lots more to do tomorrow.

Have a great Wednesday, how hot is it gonna be at your house tomorrow?