A few months back...gosh maybe even like November last year, me and my sister Jacqui's BFF Vicki were trying to plan a little surprise on my sister.  Jacqui and Vicki have these get togethers twice a year.  They met years ago at Croptopia and they figured they could do them at their homes just as easy. So they renamed them Jactopia and Victopia.  Well I have never been able to make any of them, when Granny was sick in the hospital that one year I just missed Jactopia by a few weeks I think.

So anyway Vicki and I were trying to figure out how I could come to Victopia and not tell Jacqui, I had a free plane ticket and everything. I have never used a free plane ticket before, so I never really realized...you get what you pay for...ha!  Anyway basically the airlines was telling me when I could fly and when and the dates were not working out for what we could do.  So I was like crap, we can't do it. So Vicki said fly into Detroit and I will come get you, it would be further for her to drive to get me but she was anxious to surprise Jacqui, but then I would have to get Jax to take me back to Detroit to come home and that would not work (I mean she works)...so I said no.  So we boo-hood and were happy we at least would get to meet in CA at CHA.

Then...are ya ready?  I called Jacqui (seems that when I was on with the airlines I COULD fly into Detroit and out of Detroit) so I explained to Jax what Vicki and I were planning on doing, and then I said "how be we surprise Vicki instead?"  so as I type this I am sitting at home, not even left yet, I leave tonight and I am just trying to get posts up in case I wont have access to a computer, Vicki has one, but she could like break my arms or something when I show up at her door, cause as of today (when I type this) she has NO CLUE what we are doing...I even put a fake workshop on my SU! calendar in case she was looking...I even emailed her for her address, cause I said I wanted to send them a pizza to surprise the girls. They are doing or should I say WE are doing spaghetti so calling in pizza won't work...but she did say to hook up my webcam..Oh I love being sneaky! So Kristi is even coming to Jax's early and Jax is trying to figure out how to explain a trip to Detroit without clueing her in.  I told Jax to make sure to steal her phone...ha!!

So just in case, she like does beat me up...here is what I may need... So cross your fingers we are having a blast. I am sure we are, and I bet there has been a poise pads moment by now...ha!

...I wanna be? Well I haven't decided yet, I still am just a kid at heart!  I love this little Sophie set, cause she wants to grow up so fast, and ya know what? We really do.  I mean heck I look at Eric every day and wonder how the heck did I ever get a 20 year old? 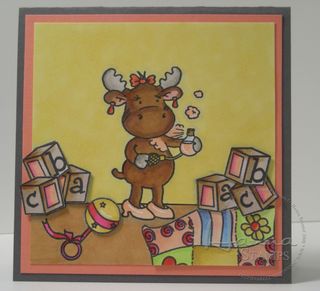 Stamp Set: Sophie Dress Up, B is for Baby (Hanna Stamps!)

I wanted this card to look like Sophie was really little so I put the B is for Baby stuff around her, now of course I left her naked and we know that if she was a real baby she would have a diaper on, but I was afraid to mess her up and did not want to draw one in. So we will just pretend she is all potty trained. Ha!

As for pretending...for like 5 months or so I have been pretending that I was NOT going to be going to Victopia...and well I am there right now.  I will tell you more about that later...ha! Gotcha Vicki!!!

Have a great Friday and thanks so much for stopping in, I love our daily chats!

Well if little means 6 foot tall and about 3 inches of beard. My sister said I should put flocking on the chin of the card, but I can't cover up that cute face.

So here is the completed graduation card for Eric.  I kept it pretty simple, no ribbons, I want to keep it masculine and flat enough to mail.  I was gonna do the tassle, and got some great ideas from readers on how to make them...thank you so much.

What do you think? 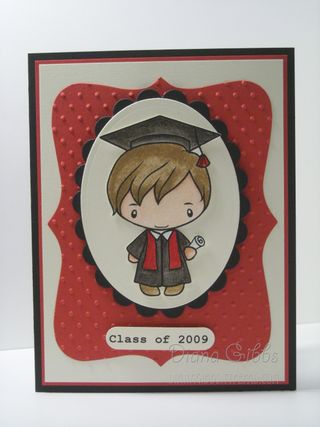 I think it turned out cute, I may make ONE with a beard. I am hoping that when he goes and picks up his cap and gown and sees his old teacher she can convince him to shave it.

Have a super duper Thursday and thanks for stopping in!

...this cards for you! Ha! Didn't think I was gonna say that did you?

This was one of the make n takes that we did while we were in Hawaii, using the new Stampin' Up! set called "For All You Do" it will be available in the new catalog.  It's a little love note card.  These are fun to make to go with a gift bag or a box of chocolates, or even jewelry... 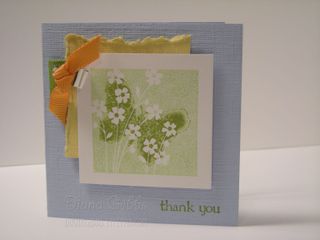 Stamp Set: For All You Do

This was stamped using a technique called kissing.

How to Kiss, like on this card: Ink up the square stamped image with flowers, stamp off on scrap to make the ink lighter. Now ink up the butterfly and stamp it directly on the inked square image.  Now stamp the image on paper...this will transfer the butterfly image like it is on top of the square.  There are different ways of kissing. Some are to apply texture to a solid stamp.  But you follow the same basic directions.

Isn't this a cute card?

I have figured out Eric's Graduation card, I will show you tomorrow.  I have to make a bunch of them.

American Idol....I love what Kris did with the song he sang, but Adam kicked butt again.  I voted for Danny and Adam. I think Lil Rounds and the guy they were gonna kick off last week will go tomorrow.  I think they need to turn down the heat in the studio, I don't remember seeing so much sweat on the entertainers as I have seen this year.

Have a super Wednesday, can you believe we had 105 degree weather on Tuesday...ugh!

Last month when we were in Hawaii...yeah can you believe it, it is almost a month ago...Aunt Flo arrived today so that is my time gauge....hence the migraine the other day...T.M.I.  I know!! Sorry!

Anyway, Gigi was one of the winners of one of the goodie bags from my Hawaii sale and look at the beautiful card she sent me as a thank you. I love it.  All the details, the pearls, the rhinestone, the bling, the embossed vellum butterfly...love it!  Thanks so much Gigi! 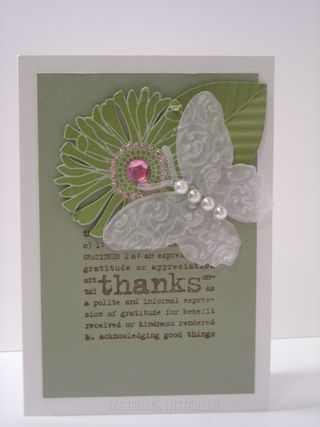 Card by Gigi Acker - Queen of the Bling

I am not going to guess what she used, just enjoy the beauty of it...I know I am.

Today I was cleaning and doing laundry cause I let it go the last few days cause of my weekend classes, so I love getting RAK's in the mail, cause then I get a day off from stamping if I have to do other things, and I can show off other stamper's cards.  Bad ain't I? Ha!

Have a super Tuesday and thanks for stopping in!