…so live a little.

A few months back…gosh maybe even like November last year, me and my sister Jacqui's BFF Vicki were trying to plan a little surprise on my sister.  Jacqui and Vicki have these get togethers twice a year.  They met years ago at Croptopia and they figured they could do them at their homes just as easy. So they renamed them Jactopia and Victopia.  Well I have never been able to make any of them, when Granny was sick in the hospital that one year I just missed Jactopia by a few weeks I think.

So anyway Vicki and I were trying to figure out how I could come to Victopia and not tell Jacqui, I had a free plane ticket and everything. I have never used a free plane ticket before, so I never really realized…you get what you pay for…ha!  Anyway basically the airlines was telling me when I could fly and when and the dates were not working out for what we could do.  So I was like crap, we can't do it. So Vicki said fly into Detroit and I will come get you, it would be further for her to drive to get me but she was anxious to surprise Jacqui, but then I would have to get Jax to take me back to Detroit to come home and that would not work (I mean she works)…so I said no.  So we boo-hood and were happy we at least would get to meet in CA at CHA.

Then…are ya ready?  I called Jacqui (seems that when I was on with the airlines I COULD fly into Detroit and out of Detroit) so I explained to Jax what Vicki and I were planning on doing, and then I said "how be we surprise Vicki instead?"  so as I type this I am sitting at home, not even left yet, I leave tonight and I am just trying to get posts up in case I wont have access to a computer, Vicki has one, but she could like break my arms or something when I show up at her door, cause as of today (when I type this) she has NO CLUE what we are doing…I even put a fake workshop on my SU! calendar in case she was looking…I even emailed her for her address, cause I said I wanted to send them a pizza to surprise the girls. They are doing or should I say WE are doing spaghetti so calling in pizza won't work…but she did say to hook up my webcam..Oh I love being sneaky! So Kristi is even coming to Jax's early and Jax is trying to figure out how to explain a trip to Detroit without clueing her in.  I told Jax to make sure to steal her phone…ha!!

So just in case, she like does beat me up…here is what I may need… 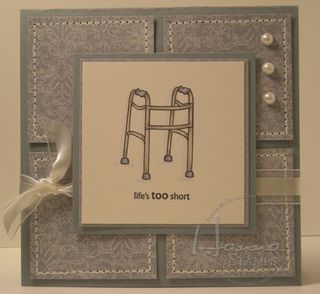 So cross your fingers we are having a blast. I am sure we are, and I bet there has been a poise pads moment by now…ha!