…while I whip something up.

So Monday I emailed MAMMa (My Arizona Mum Marlene) and asked if she wanted to go to Rhonda's with me and carpool and she said yeah!  We hadn't seen each other since Hawaii, and I love those women and miss them tons.  So she said that she would work on a swap, and I told her don't stress over the swap, and not go cause she did not get one done.

So when I went to pick her up, she was just finishing getting dressed so I visited with MADVi (My Arizona Dad Vinnie) – I ought to put a dictionary somewhere on here eh, so if you are a new reader you know what the heck I am talking about. So then when she was ready, she said "wanna see my swap?" and she showed me what she had whipped up that day. 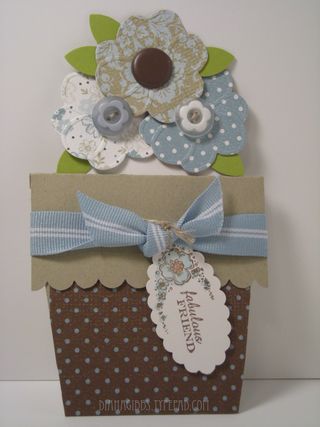 …this, neat eh, you can write your message there.

Now the thing is, not only did Marlene just whip these up, she whipped up 11 of them, and she had just saw the pattern on Splitcoast stampers that morning…let me see if I can find the link…you oogle and ahh over the card while I go look…

Oh my gosh here it is and it is done by none other then my friend Lynn from Paper Craft Planet…I shoulda known, she is one talented gal too…oh wait I read a little further and here is the pattern by Stephanie.

Well I think Marlene did an awesome job whipping these up..it still makes me chuckle.

So one thing I did when I was waiting for MAMMa to get ready was to show MADVi the pictures we got back from Walmart, we had bought a disposable underwater camera, so we had no clue if they would even turn out.

But look what we got back…

…our sea turtle.  Jeff and I found it before anyone else, well in fact Jeff had the camera and I saw the fin come out of the water, or it might have been the head and I was like "give me the camera, there is something there" and he was like "no there isn't" and then up come the head, and he gave me the camera really fast…so we kept calling it "our turtle", I mean I was trying to tell people, kinda calling out "look here" and Jeff was like "stop yelling" well I did have my ears out so maybe I was yelling…but they never heard me.  Eventually more people found the turtle and there ended up being 3 of them, I wish I had of taken more pictures.  I was feeling a little seasick after swimming in the rough water and I didn't want to go back in. What is funny is, Jeff took a picture of this coral,

and I think the turtle was right beside him and he did not know it.  Here's a few more pics of him/her… 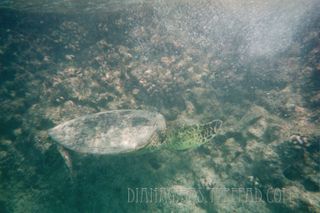 …we just thought it was so cool, we had only snorkled one other time (before Hawaii) when we were on the Panama Canal cruise with my BFF Tracy and her tight tushed hubby Steve and the water was so blue and calm and we were finding sand dollars and stuff, this time the water was pretty rough.

Here is one more… 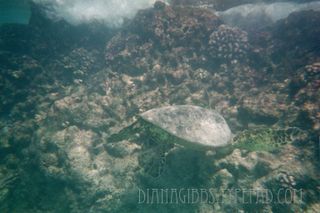 … I guess really they are not too bad considering the amature photographer who was afraid that the turtle would bite her, cause the waves or the tide kept making me go closer and closer to the turtle, and I swear I was closer to the turtle then these pictures show. It reminds me of one time we were camping when I was younger and there was a bear and I just grabbed the camera and started following him and was taking his picture, not realizing I could have gotten killed, of course I think Poppa and Granny brought that to my attention later…not that the turtle would kill me but I was so excited to take the pictures I just went right down there and did it, not really thinking well gee what if the tide does smash me up against the turtle, they told us not to touch them, and what if he were to have bitten off my lips or something. See I didn't think of any of this till, well now actually.  Man that was a close call. Just call me Evel Kneivel Diana.

This wild underwater creature I could not tell what it was, I was too afraid to get much closer because of the tide. It might have snagged my ankle and dragged me down down down below to the bottom of the ocean, so I just quickly took its picture and swam away…(softly play JAWS music in the background)

Well I can't sign off without giving my two cents worth of American Idol.  I only care for Danny and Adam now, and they are who I voted for, the rest I could care less if they win, cause I would never buy their album, do we say album anymore?  Did you see the lipstick on Paula's teeth when she was smiling and they showed her up close?  I think that the Kara should zip it, and that she is the reason (well not her personally) but the fact that there are 4 judges, that the show is running over the time, and then they have to rush it at the end.

Well that is it for me, I gotta hit the hay, got some errands to take care of in the morning, and my downline meeting is Saturday so I wanna whip up a cute make n take, and get my swap done.

Have a super Wednesday everyone and thanks for stopping in!