…and that's what Stampin' Up! is all about…lifelong friendships that formed because of Stampin' Up! I know you have heard me talk about it before, but it's true…

I will have more friend pics to share as more come in, I am the worst person for taking pics…with me in them..ha! So as people send me pictures I will share them…unless I look like a horse's bleep – ha!

Here are a few quick ones to show you, as I have to get off here and get some stamping done…

Here is Dawn, Me and Terri – It was so funny, I have known Dawn for years, we are sidelines – we are both INKredible girls.  A few years ago I met Terri when we were having passport issues and she said call your senator, and it worked, we got Jeff's passport just in time, I think it was the day before we left.

Terri and I kept saying we would hang out together if our passports never arrived.  Then I found out that Dawn and Terri knew each other! 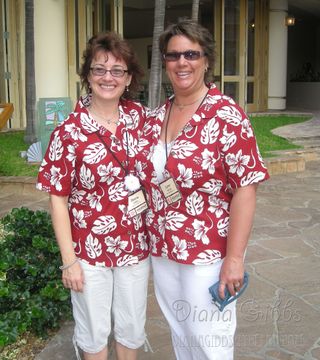 Here is Lynn and I – we are also sidelines, cause Lynn is an INKredible girl too – nice shirts eh? Ha!

These were the SU! shirts we could order, and then we picked them up there.

Here is my good friend Patsy Waggoner, we met years ago on the Alaska cruise, she has the same last name of a friend of mine in Arizona, Lucy who used to be a Demonstrator, and somehow they think their hubby's are related down the family tree aways, so when I saw her name tag while we were in line for make n takes, I was like "Patsy" and she was like "Hi" and then I had to explain who I was, and I invited her to sit with us for make n takes, and we have been friends ever since, and I feel bad cause we kinda ditched Patsy and her hubby without knowing we ditched them to go to Kona to shop, we thought they went on the bus that just left so we left on the next bus thinking we would see them, and well they had not.  Oops!

Here is Jeff and my BFF Tracy, well she is on the phone, but she was there just the same. 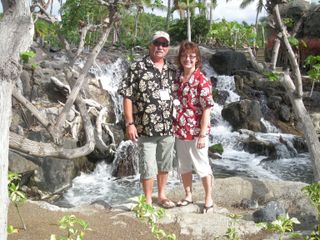 Here is Jeff and I standing by one of the waterfalls along the sidewalk at the resort.  As we were walking Jeff says go stand in there and I will take your picture, and I was like ummm..am I supossed to be in here, so then I hear "hey" and I thought oh oh I was gonna get in trouble and then I saw who it was it was the President of Stampin' Up! Dale, and he told Jeff to get in there with me and he would take our pictures.  He took a couple.  Jeff thought that was pretty cool, he did not know who Dale was at first and then I was like it's the President…funny eh?

Ok, I am off to stamp…have a great Tuesday, remember today is the last day of Sale-a-Bration, and also the last day to save on the Demonstrator starter kit. Holler if you have any questions.