…I remember in school learning how to type…on a typewriter, and we were not supossed to look down and we had to look at the board I think and type what was there or was it on a photo dohickey thing that shined on the board, I don't know, but I do know that any boo-boo could not be fixed with a tap of the back space or the delete key.  We had to use a little eraser with a brush on the end to get rid of our mistake even though, it took half the paper with it and the person getting it would know you boo-booed. Then there was that white piece of paper that you would lay over your mistake and then re-type it and it would cover it up, so you could re-type and that looked better, then there was white out, and then the typewriters that actually had their own eraser sticky backspace tape stuff to remove your mistakes. I had a typewriter like that when we got married, cause I used to be a secretary, and it was a neat machine that had a window that showed what you were typing and would not actually type until you hit the enter or next line key. Boy are we spoiled today with computers? I mean do they even have typing classes in school any more? Cause it is considered still typing right?

Well one of the stamp sets in the Stampin' Up! catalog is called Puns from the Past and it is such a cute set. I have my 10/10/20 Special Occasion class coming up so I was checking out Splitcoaststampers to get some inspiration, or heck some cards to copy.  I saw this one and thought oh wow, I am definitely doing that one for class.  It is way cute, and pretty simple.

So this is my version of it.

Stamp Set: Puns from the Past

I do miss the clickety clack sound of the typewriter keys though…don't you?

So today Jeff said "hey your flower is up!" and I was like oh wow, I just looked at it the other day, and it was just the green leaf things, and now look. 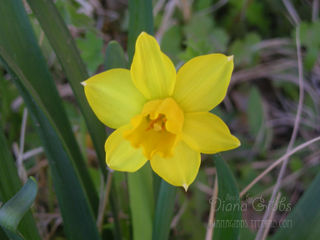 Pretty eh? I took a few pictures, but the wind was blowing and the pics kept getting blurry so this was the best one of the bunch.

It is perfect isn't it? Nature is something. This was just a little cheap old flower I bought years ago and planted once it died in the house, and it gets bigger every year, in fact last year about 2 yards away, and on the other side of the side walk another one was growing and I didnt even plant it, (so it had to come from this one somehow) no flowers came on it (just like this one took years to actually get flowers), so I dug it up and planted it about half a yard from this one, and it started coming up this year, but Jeff sprayed weeds and he thinks he may have sprayed it, so I am hoping if he did that it will survive.

Well have a super Monday and thanks for stopping in!