When Jeff was younger he learned how to make a quarter disappear from reading the instructions on the back of a comic  book. To this day he still does it and kids love it.  My dear friend Terri Mongeon (hey sweetie) who is probably as we speak on a plane coming home from Hawaii, Jeff did it for her son while we were waiting for the bus to bring us back from Kona.

I remember when Eric was born I wanted to stay home with him so I put an ad in the paper so I could do daycare in our home.  One couple that answered my ad were Teri (hey girlfriend, are you all rested up from Hawaii?) and Julio, and they had little Victor, he was a couple weeks younger then Eric, I can still see them to this day sitting on the couch while they talked to us about looking after Victor and I can still see Teri that first day leaving her brand new first born at my house while she went to work with tears in her eyes, and me telling her to call anytime during the day to check on him.  James came along about 3 years later (me and my math, I hope I am right) anyway they are all grown up now. Too funny, people think Teri and I went to school together cause we have known each other so long, and I always say I put an ad in the paper for a friend, and she answered it. 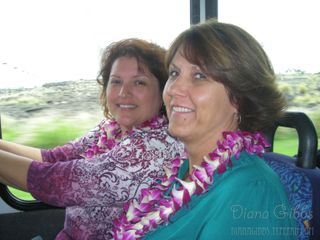 Here is Teri (flowered shirt) and her BFF Shellie (green shirt), they left their hubby's and kids home. These two HAVE known each other since school.

Ok, so back to the quarter trick, when the boys were little Jeff would do the quarter trick for them, and we had a little yorkie called Sherwood, and Jeff one time made it look like the quarter came from the dog's butt, so then when he would say where's the quarter, Victor would say "the dog's butt" it was so cute. I have a video of Victor reading a story, and he could not read yet, but he just remembered certain words and he repeated them and repeated them as plain as could be. I love watching those old tapes.

So while we were on the trip my BFF Tracy said that her hubby Steve said that Jeff had to have a Guiness on him, cause last years trip they both had Guiness mustaches, so while we were in Kona Jeff picked up a bottle of Guiness, we also picked up sandwiches, and chips, and Teri and Shellie had their munchies and we were gonna sit by the pool and eat.  So then Jeff realized that the beer bottle was not a twist top and he needed a bottle opener so he took off and was gone forever, so we figured he had walked to the bar or something to get it opened, so he finally shows up, and his fingers are wrapped in tissue, he had to change his shirt cause he had gotten blood on it and he was a mess, and it seems like he used his magic quarter to open up the beer bottle and the top cut his two fingers up, so we teased that we were gonna wrap mini pads on his fingers, but Shellie had bandaids, and he was good to go.  So the quarter trick is not so fun on beer bottles.

Speaking of butts…I mean I did say butts right? 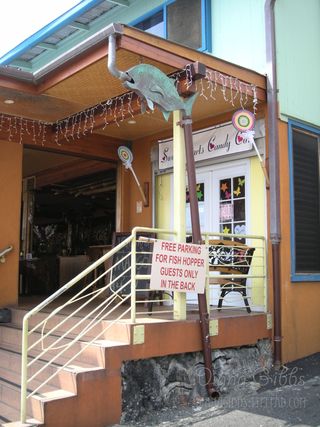 Look at this fun water thing, the water goes in the fish mouth and out its butt end down the drain pipe thing.  I love stuff like this. I mean this is the kinda stuff Jeff loves to make.

I also wanted to share the awesome bags we got this year from Stampin' Up!

We usually get pillow gifts from Shelli, and we usually get a bag each year, one year it was a beach bag with towels in it. We got an awesome wickery basket one year with one of the mats you lay on the beach in it.

This year I think was my favorite bag so far, I screamed when I saw it. 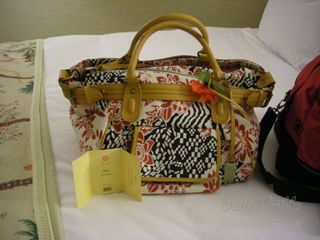 This was mine, and it matched the wallet we got with our plane tickets in, I had a baby shower to go to today, and I took it with me cause I had not unpacked it and my purse and all that was still in it.

Here is Jeff's bag, cool huh? I love when the guys get something, they usually do.  This year there was no spouses stamping or get together, Jeff was fine with it, I mean he didn't have his Steve to go to it with anyway, although he met some guys he gabbed with this year. One was Thurman, Kathryn's husband, they are a riot! 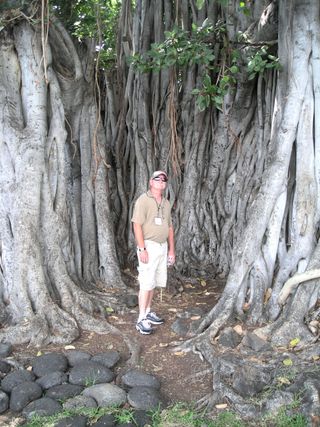 Here is Jeff under a tree, and I am thinking it was a banyan tree, I was comparing it to the dreadlocky fishy wormy things on the one character in Pirates of the Carribean, remember him? Doesn't Jeff look little? I mean look at the dang rocks? He's like a Hobbit.

Well that is all the Hawaii pictures for tonight, I gotta hit the hay, I have club deliveries tomorrow, and the grocery store to go to, and I still have a few girls to contact for orders from my special.  If I have not hollered at you yet, I will today, I didnt want to call you too late, with the time difference.

Today is my little sister Courtney's birthday!  Happy Birthday Sis!  I love you! I hope Jason takes you out and treats you all special and stuff.

Have a great Monday and thanks for stopping in!