…the pod of an edamame bean? 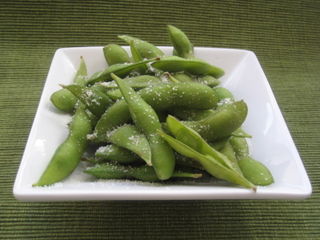 : immature green soybeans usually in the pod
I also found this: Edamame is a green vegetable more commonly known as a soybean, harvested at the peak of ripening right before it reaches the “hardening” time. The word Edamame means “Beans on Branches,” and it grows in clusters on bushy branches. To retain the freshness and its natural flavor, it is parboiled and quick-frozen. In East Asia, the soybean has been used for over two thousand years as a major source of protein. Edamame is consumed as a snack, a vegetable dish, used in soups or processed into sweets. As a snack, the pods are lightly boiled in salted water, and then the seeds are squeezed directly from the pods into the mouth with the fingers.

I ask cause when we went to Roy’s the other night the young girl at the next table stuck the whole thing in her mouth and started chewing.  I just looked at Jeff and said “she stuck the whole pod in her mouth”, cause I will admit the first time I had ever seen the things was when my friend Rhonda and I went to Pei Wei for supper one night and the people at the table next to us were eating them and we kinda snickered at how funny they looked as they stuck the whole pod in their mouth and then chew chew chew as they pulled the pod out, and then they layed the empty pod on the other plate and went to town on another one.  So yeah, ha! the next time we were there we were like “lets get those green beans” so we did and we ate them all professional like, just like the other people and they were darned good too.  In fact I usually have a bag in my freezer, they make a great lunch.

So anyway when we went to Roy’s they give you a plate of them, every table gets a plate, kinda like the chips and salsa at a Mexican restaurant.  Jeff just looked at it, and picked one up and I could tell he was just gonna take a bite, cause they do look just like beans.  I said “watch” and showed him how it was done. So he did it and enjoyed them too, we even joked and called them peas…Hi Tim (my brother in law, and he reads my blog – waving at you Bro!!) this one is for you, he thought peas and beans were the same thing (this coming from a country boy farmer), he said that peas came out of beans, and I was like nope, peas come out of peapods.  It was so funny that little conversation, he asked cause I was eating sugar snap peas and my Mum’s veggie dip at the time, and I think he may have had a beer or two – ha! I love that guy!

OK, back to this poor girl, so after the paramedics wheeled her away…ok just kidding, I just watched her chewing and then she got this look on her face like “what the heck is this?” and then her Mum said something and she continued to chew but then graciously as one can, removed the somewhat chewed on pod and put it on her plate.  So I was like? Would it have killed her? I mean the bag says pod is not for consumption and I know without even getting my dictionary out, that that means not for eating.  But no way would a restaurant serve something that would kill you? Well not purposely, I have come home from eating out one time and ran so fast to the bathroom as my rear exploded, and I am sure everyone has…they may not admit it on their blog like I just did faithful readers, but we are friends right?   I am sure the richest and fanciest person in the world has had the trots before…that’s another Granny word…”I have the trots” meaning “I have the s*its.  So I am thinking it just means don’t eat it cause it will make you sick.  Anyway, if you have never tried Edamame, I suggest you do, it is very good for you too…just don’t eat the pods.

So my post the other day I mentioned that some people think I have a bit of OCD happening, but I think it is just being superstitious.  One lady, Brenda (Hi!!) commented about hand sanitizer, menus and salt and pepper shakers, I think the hair on the back of my neck stood up.  I keep hand sanitizer in my purse, a friend of mine says that now the germs are still there but dead…now that I wanna see under the microscope, you see all the dead germs with the little “x” over their eyes laying all over your hands, maybe one or two of them, their legs are still twitching..ha!

Sorry about the whole indented paragraph – typepad is trying to make me look good..ha! but I can’t get it to go away.  So back to hand sanitizer, I use it at the restaurant after I read the menu, I mean come on, don’t you?  How many hundreds of people touched that?  One time we went out to eat, and I figured out what I wanted I set the menu down and lubed up my hands. I may have even heard a germ screaming in the throes of death…ha! not really my ears suck….so anyway, the waiter comes to take the order, and we give it, and then he looks at me to give him the menu and I look at the waiter, I look at the menu, I look at the waiter, I am thinkin’ its right there dude on the table, then I looked at Jeff…and he was a fart and just smiled, cause he knew that I didn’t want to touch it, so I picked it up cause heck I couldn’t use my fork to push it closer to the waiter, cause then I would be like I need a new fork now.  I just double dosed me on the sanitizer.

Don’t get me started on grocery cart handles…ok you did, so this one time at band camp…just kidding…one time we are the store, and I am telling Jeff don’t touch your face after you have used the cart, (I swear Eric got pink eye one time from a cart at a local megastore) well then he pretends he is gonna lick his hands and the handle…he didn’t, but still…see why I am like I am?  I have to over compensate for the men in the house.

Wow what a lovely post for Valentine’s Day eh?  How about a fun card? This is my Valentine for Jeff..do y

This was a fun card to do, I mean kinda wacky, and crazy.  I didn’t even stitch straight, well actually this was probably the straightest I ever stitched, it went around almost perfect and then I went around a second time and made it all wavy.  I mean a skull with wings, calls for crazy stitching. 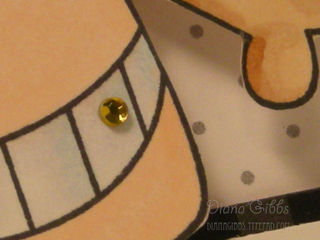 I even added a gold filling to one of the teeth, I almost put one on all the teeth like some rap singer I saw on tv, I swear all his teeth were glittery gold, and I was like what the heck?

I mean does he eat like that? or is it like something he snaps in to attract the ladies? 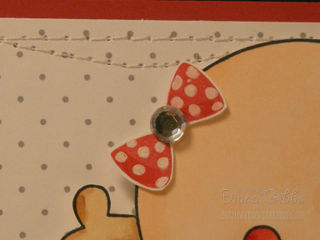 But my skull girl – she has class and only has one gold bling.  I think my pal Wendy from PCP, called it grill.  Ha!

Tip: see the shiny bow? – that is actually a rhinestone brad from the Pretties kit, I just opened up the legs in the back and popped out the rhinestone, and glue dotted it on there. 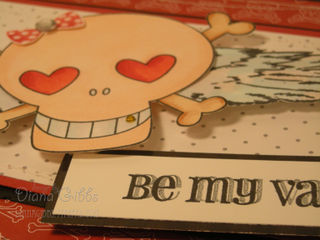 Tip: The greeting I double stamped, which means I stamped it once, and then lifted it up a tiny bit off the paper and moved it over just a tad and stamped again, and it gives it a shadow, if you keep doing it over and over it would look like motion, try it with a car, or a ball…that is way cool. 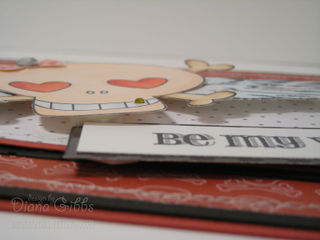 I used a lot of dimensionals on this card, in fact there are two dimensionals stacked on each other for the skull.

I figure I aint gonna have to mail it right? I will give it to my honey in person…(and then take it back)… any time he wants to look at it, he can find it on display in my stamp room…ha!!

Have a super Saturday, kiss your honey, and thanks for stopping in!