Remember a while back I think I mentioned my friend Russ (aka Molly) from Molly Stamps did an M&M commercial, (he has been in quite a few different commercials, and even a little snippet in a movie) …and we have been asking and asking when it would be on tv, we were thinking perhaps during the super bowl..but nope.  It's all computer generated obviously cause well M&M's don't really walk and talk, so that all had to be done.

So the other day Russ heard that the commercial is not going to be made, (actually Russ corrected me right now and said:  The commercial DID get made.  But they outgraded him.  So Russ is not in the commercial.  It's still on TV in all it's non-Russ glory.) and I was like "what? – of all the nerve! How dare they!" so I told him that I had his back and would not stand for it…so today I was at the grocery store and I saw one of the little buggers and I was like no way are you going to treat my friend like that…so luckily I ran into a friend of mine – Hi Emily!! and she took my picture… 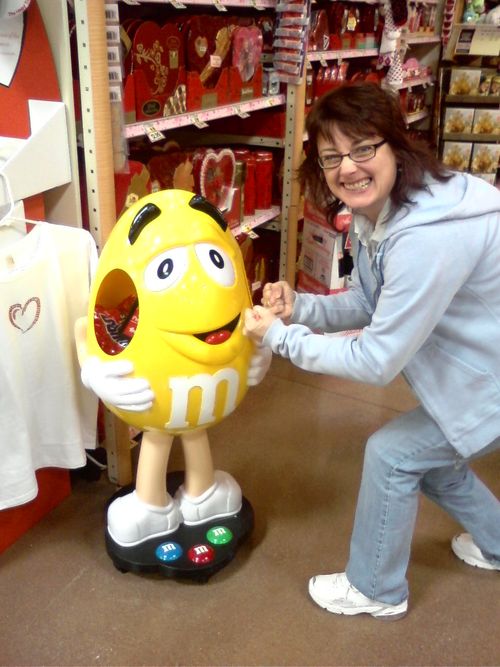 Take that, you yeller varmint!

How dare you, ya yella bellied sap sucker!

Off with your head! – if you had one!

So after I kicked the snot out of the M&M, Emily had to know what was up…she said "I see this as being a blog post" and I was like I don't know how to put the pic from my phone on there, and she is like "just send it to your email" so her cute son (kid's now-a-days – they are so stinkin' smart) he showed this old woman – me! how to send pics from my phone to my email…OMG! I think a monster has been created.

So I said bye to Emily and her son and did some grocery shopping, I picked up some REESES PIECES, cause that is what this house is eating from here on out…we have boycotted M&M's.  So as I was walking around, I felt something watching me…you know that 6th sense you have…the little voice in your head that you should listen to, the one that usually says "Diana if you have to lay on the bed to do up your pants you should really buy a bigger pair" that voice…the one I usually say "awww shut-up – they shrunk in the dryer" but this time I listened and I turned around and there it was…another one…well I said "You don't scare me – take that!!" and… 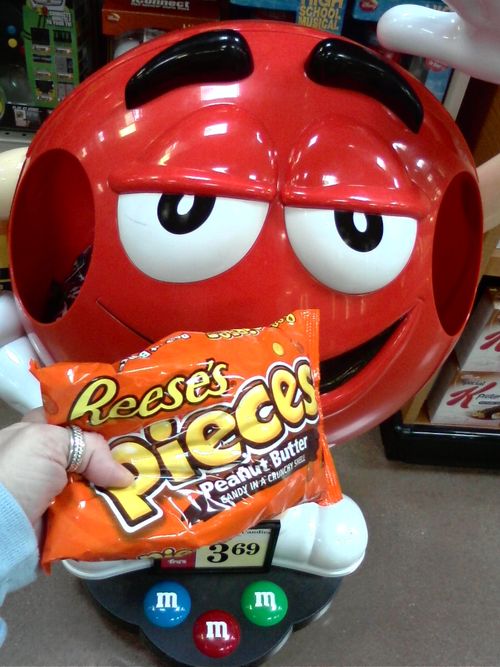 …I stuck my Reeses Pieces in its fat round red face, and it ran off with its tail..well they really don't have a tail, but it's butt cheeks were really tucked in as it ran away..

So yeah I got Russ' back!

Anyone else have a problem with the M's? Just holler, I seen the green one cowering off in the corner, next time I'm bringing my flyswatter!!!

Well I am signing off for the night, I got me some PB&C to tend to.

P.S. No M&M's were actually hurt in the making of this blog post…it is all for fun…