So, how nice of my little sister Jacqui to take care of me while I was without my computer…I am back!!! Yahoo!!, I had to get a new power supply. It just didnt start the other morning, I pushed the little button many times and nuthin'. I had to take it in to the computer repair (of course the one by my house has closed down), so I had to go to one further away, so I walk up to the door with my computer tower in my arms, and of course the door is a pull door, and the guy behind the counter just looks at me, so I kick bump the bottom of the door gently with my shoe. He comes over and opens the door for me, and I said "gee that oughta be a push door" and he said they tried to make it one and can't and I was thinking, well then gee you best get your butt over to the door faster from now on when you see someone walking around with a computer, I mean what did he think I was doing, taking my computer to the Block Buster video next door?  Here little computer YOU pick out the movie YOU want to play.  I didnt say it out loud, but I was not in a good mood, I had a super day the day before, my workshop was such fun, and no head ache that night, and just an overall good day, went to bed with a smile and Toby even slept all night with us cuddled beside me…my precious!   So waking up to a dead computer didn't start out my day very well.  Then they were saying 3-4 days and if I wanted to pay an extra $100.00 they would move me to the front of the line…I said no thanks.  They said it could be the mother board or the power supply and the computer Gods were smiling on me and it was the latter which was cheaper, and faster.  I do have to run it back next week, the DVD player thing wont come out and they said they may have forgot to plug it in, and the fan is so loud. But the box they gave me that the thing came out of says "super silent" – hmmm….I guess when I take my hearing aids out and have a "quiet day" (I do that from time to time) then the fan may be super silent, but right now…nope its pretty loud, and it runs constantly.

I wanted to let you see what Jacqui was gonna post for today, I got a chuckle out of it when I seen it. She kept saying she would post a picture or tell a story…little does she know since I am older I have MORE pictures and MORE stories, so she was wise to be good…ha!

Obviously Diana's computer is not working yet. So I am posting another card for her. If I was evil, I would tell y'all that I made this awesome card….but I cannot tell a lie!! This is another card that she had prepared and ready for a future post. She is so on the ball!!! 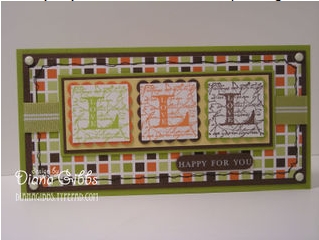 She will update the recipe when she gets back online.

Such a sweet thing she is, but I remember this one time when we were kids…ha! Better save that story for another time…

OK, so this is the post that was gonna happen, the other day.

The frame that I did was for my Leadership stamping, we had to do so many 3-d items, and I must say that I liked the frame best out of all the things I did.  I had submitted a pic of it to a magazine and never heard back so hey lucky you, you get to see it…two days in a row…ha!

Misc: frame I got at the dollar spot at Target

I really want to re-make this for myself, cause I wish I had of taken the picture better so you can see, cause the bird looks so real, like he is sitting in there, cause I popped him out, you can kinda see the shadow.  I love this bird.  If I redo it, I may use a different set for the trees he is in, since I can use anything and not have to stick with the set like I did before, maybe Branch Out…hmmmm….I will have to play around when I got time…time? what the heck is that?  Ha! 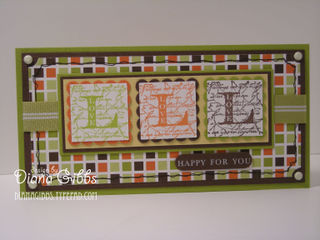 Stamp Set: Ever After

Hopefully you got to know my sister a tad (even more if you clicked on over to her blog), my hubby came home from work today and said "your blog was boring today" and I said Jacqui was helping me out and we did it quick, and he said he understood but I guess I should be happy that my hubby thinks I am not boring.  I told him that Jacqui was gonna say stuff, and he said "yeah she should have told a story about you when you were young"…they are in kahoots I tell ya….that reminds me I better change my password…ha! only kidding Jax! Thanks for helping me…I owe ya!

Well I am hitting the hay, I got my Just Buzzin' class in the a.m.

Have a great weekend, and thanks for stopping in!