Does that tell ya what I got today?  Jeff and I ran some errands and went to lunch and checked out Target.  Jeanne said she has a Shark and she got it there, so that is what I looked for but they did not have any today. They have some coming in but did not know when.  I looked at a Singer but it was $20.00 more.  So then I ended up going to Walmart later and I got me a Brother LX3125, and a bunch of do-dads to go with it, for under a $100.00 so I am a happy camper sewer! Hey did I say I was a sewer, that looks like a poop under ground container word...oh well who knows, maybe I spelled it wrong, but you know what I mean.

So here is what it looks like, right outta the box in this picture.

Heck it's still got the tape on it, so nothing flew around or off in shipment.

So I have not sewn since Home Ec class in highschool and that was a longggg time ago, I mean I have my Great Granny's Singer treadle sewing machine(I think that is what is is called) and it works but I don't want to use it for my paper stuff, it is more for display, I had to unhook the belt years ago cause Eric would get in there and mess with the foot treadle when he was little, sitting on it rocking up and down, like he was at Disney land or something.

So I whipped up a couple bobbins lickety split.  I could do that all day. Felt like I was accomplishing something, made a white one and a vanilla one. 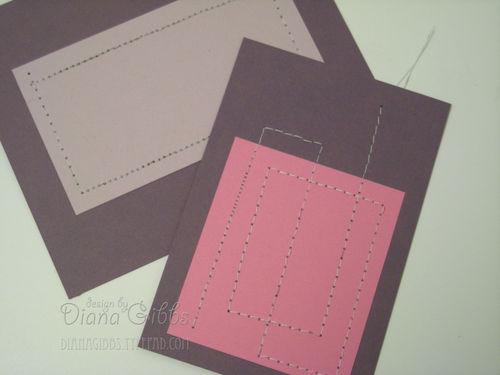 Then I got to practicing on paper, Jeanne said to practice to get the tension and all that right, and well don't laugh….I can hear ya…ok who snorted?

I have to learn not to hold the paper, I was trying to keep it straight and actually not letting it move, so I can see some tiny stitches, ugh, aint my cards gonna look nice from now on! ha!  Down go the readers, and lots of unsubscribe notices…ha!  I'll get the hang of it.  Practice makes perfect right?

So Jeff has been practicing too on his Shop Smith, playing around with old mesquite tree wood he has cut down over the years, and look what he made me? 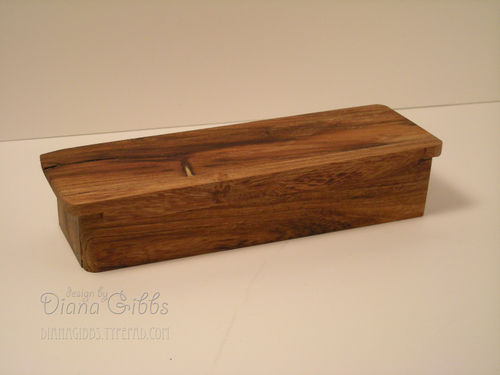 It aint that big, but I should have put something beside it so you could get an idea how big it is.  The picture can be deceiving.

I am going to put brads, or something in it, I am not sure yet.

But it is all out of wood, no nails or anything, and it is so cute.

Here it is with the lid off.

So when times get tough in the Gibbs' household and we need to make some extra cash, I will be selling bobbins, and Jeff will be making little boxes…ha! Perhaps my bobbins would fit in the box.

Well I hope you are enjoying your Tuesday, I can not believe that this year is almost over…holy moly, time flies when your'e having fun!