A sneak peek at some brandy new Hanna Stamps! sets? Well here is one of them. 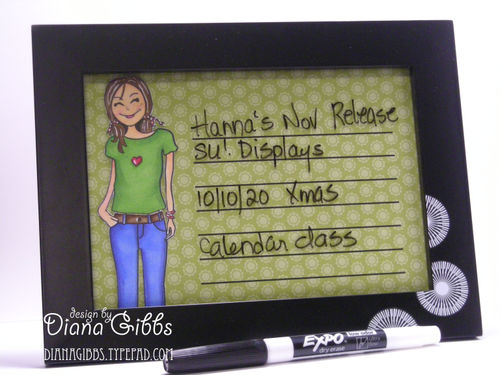 I have seen people using just regular old picture frames and making them a dry erase board, so I just bought a 5×7 Stampin’ Up! black…(that’s like a little joke around my house, whenever I buy something in black I am calling it the Stampin’ Up! black. When we bought my new truck last year I wanted it in Stampin’ Up! black, but being we live in Arizona, black is not the best color to have for your vehicle, so Jeff said no way!)… frame at Tarjay, and using my computer printed lines on one side of my designer series paper, I picked one that had certainly celery so it went with my studio, and then I added a fun new image from Hanna Stamps on the side, not like I look like this, but I still think she adorable, and I can pretend.

She is called “Read my T”, and the set will be available on Thursday night after the Release party over on Splitcoaststampers. Just go to Hanna Stamps and check them out, there are a couple new Rileys and a few new Hanna’s.   Isn’t she cute, and guess what? I like totally colored her with my Copics.  I am slowly getting used to them, but am so looking forward to the class when I go to CHA in January.  I also added some butt-hole look-a-like rub-ons.  OK, now that sounds horrible, but Cindy and I pretend these are butt-holes…now I don’t even know why I told you that, maybe cause I feel I can just be my wacky self here…but we are nuts, and we get gabbing and laughing and well it just came out one day that they kinda look like that…but anyway, they are more like a dandelion thing, but don’t they look cute rubbed on the side of the frame? I just cut them before applying them as I was afraid they would tear if I did it after and that way you save the other part of the rub-on for later, and isn’t that kinda being green, re-using, saving, being frugal?  But anyway, you just write on the glass, and rub it off with a kleenex.

Make sure you check out the other DT members under the Hanna Stamps! header to the left to see what they are showing…I know I am gonna, those girls are so talented!

Also, have you ever wondered if there was life on other planets? If there was, would they be friendly? Would they look like us? Would they pick at our brains? Well if you look to the left you will see a little badgey that says Paper Craft Planet, click on that and sign up, and you will see that, there is life on another planet, the people are very friendly, they look just like us, and they do pick our brains…well for ideas, that is, but they also share ideas, have challenges, and contests and prizes, and all sorts of stuff, and that is the best part too.  So go check it out…I’ll wait here…….and we can finish up when you are done.

OK, you’re back…see that was easy eh? I bet you are gonna meet people that you have so much in common with you will be so happy you joined…heck maybe you will be like me and find your BFF doing this silly little thing called Stamping…of course you can not have MY BFF, ya gotta get yer own!

So Jeff did not get hurt much at the rodeo, Lee snagged the bull pretty quick and Jeff pulled a muscle running out to get the bull and he got some rope burns, not anything different he don’t get from me…ha!!!! He was the most handsomest cowboy out there,
and look at his little decorated number sign, and he tried to tell everyone that I did it on my own……well I did it on my own, but he asked me to, the bugger, my friend Debbie McKelvey (hey girl) even emailed me to say he was acting all “well look what she did, yeah all on her own, set it on the counter, and 5 minutes later look what she did…blah blah blah” the old softie just don’t want people knowing that he is an old teddy bear!

This is the old Stampin’ Up! set Cowboy Kid…love that set, want him to come back too!

So here’s the ol’ Cowboy from the front….he hates getting his picture taken so he would not smile, or perhaps he had that danged old chew in his face again…daggnabbit! I on the other hand say if someone is gonna take your picture anyway, you best be smiling and make it a good one…don’t ya think? Anyway, I think he was a little nervous about the upcoming event and he just wanted to be let alone…hello!!! who ya married to? Not the leave it alone girl…that’s who!

So anyway, thanks so much for stopping in!