Well today we had Jeff's brothers and sister and their families over for Thanksgiving.  Since I have been busy with display stamping, DT work and all that good stuff, Jeff was a total Emeril and cooked everything, (he soaked the turkey in brine for 24 hours, and then smoked it all night long), he made homemade stuffing, homemade scallop potatoes, (my BFF Tracy's is weeping and her heart is beating a little faster as she reads this….I just know it!) and then everyone else brought everything else. So we had a householdfull: Jeff's younger sister, Patty, her hubby Bob & their daughter Emma, Jeff's younger brother Tim, and his two girls Charlie & Frankie, and Jeff's older brother Mike, and then Jeff, Eric and I, we ate and visited, and I am still stuffed.

Mike just moved out here in the last month from Illinois, Tim and Patty have lived out here for quite a few years, and they met their spouses and started families while they were out here.

Tim, and his two girls, and Mike live out here by us, so we see them once in a while, but it has been it seems like forever since I have seen Patty, Bob & Emma, so it was great to see everyone.

After we ate and sat outside, it was really nice today, it rained last night, so it was nice and cool and the AZ desert was not blowing dust everywhere…you know how I like that…NOT.  So Patty and Emma and I hung out in the stamp room later, and Patty was going through my cards for sale, (she works at a school and they use them for the teachers etc.) and then I said she could go through the other card boxes too, and if she wanted any of those, pull them out and if I wanted to sell them, I would get her an envelope, (now that I have started my blog, it has been a little easier saying goodbye to my cards…I mean I can always come visit them again on here right?) she found 35 she wanted, and I also gave her some other goodies off the shelf, and Emma even left with some gems she found exciting.  So I should really be finishing up my display scrapbook pages, but instead I am going through my cards, and getting them ready for sale. Card fronts need backs, and some just need re-touched! I gotta bug up my butt to do it and well I'm scratchin' it and gettin' it done.  I have a class I am going to be teaching in Prescott the first part of March and the lady that runs it said I could bring things to sell if I wanted, so I figure what is left after my classes I will take. 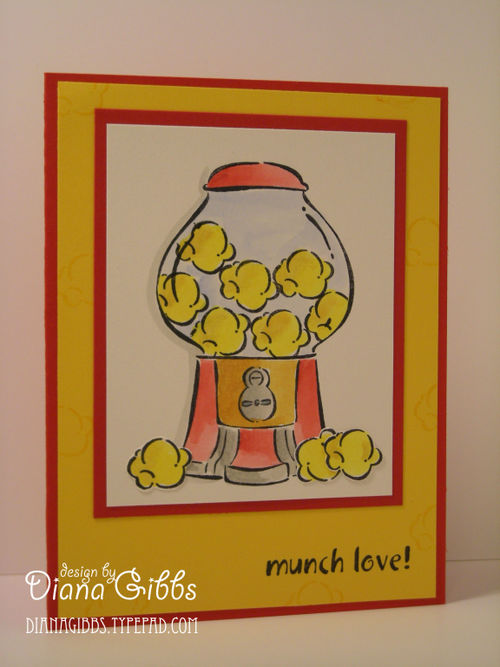 So I thought I would show you a couple oldies but goodies, I hope I have not shown them before, and if I have, well you won't see them again, cause on my spinner rack they are going.

I loved this set, and it was fun to put different things in the bubblegum machine, it was one of those think outside of the box sets.

Cause no way would you get popcorn out of a bubblegum machine. Ha! 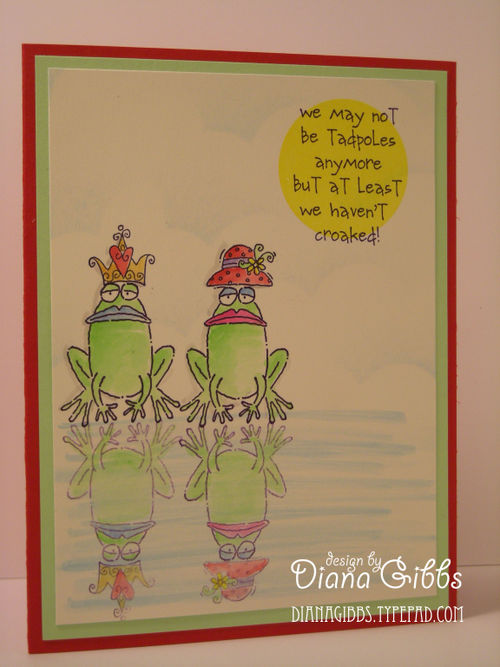 This is an old set called Birthday Banter, I got this card idea from I believe Marlene, my MAMMa, and I think she saw it on Splitcoaststampers by jreks (I just looked it up) I love it, in fact we got it at a regional event I think and I even at one time sold mine.

Then I kicked myself, and actually tracked down another set and had to re-buy it, for pete's sake, just take a pill already Di! Ha!

This is an old set called In Full Bloom and it holds a special place in my heart because this set was one of the first sets I ever worked with as a display stamper for Stampin' Up! Oh my gosh that was years ago but it just feels like yesterday.

Maybe cause yesterday I was working on new display stuff! Hee!Hee!