I love doing, I guess you would call odd sized cards. I dont mean like odd as in octagon shaped, but I like to make the square cards, or bigger then normal ones, or the long notes are fun too. It's like when you scrapbook, the bigger the page the more "stuff" you can do to the page. So the same goes for cards. Who cares if there is so much ribbon on it and brads and embellishments you couldn't get it in an envelope if you tried…I mean when 2009 comes around I am going to actually start mailing out my cards…gulp…I have a few months to get used to the idea.

This is a little card though, called a love note. They are 3×3, and we did this one at an event a couple years ago, and while I was going through cards I thought I would pull it out and show you.  I think it was originally shown in the Stampin' Success, which is the magazine I get every month as a Stampin' Up! Demonstrator.  I love it, there are so many ideas in it and it is also a place to see what other Demonstrators are doing. Just one of the perks of being a Demonstrator. 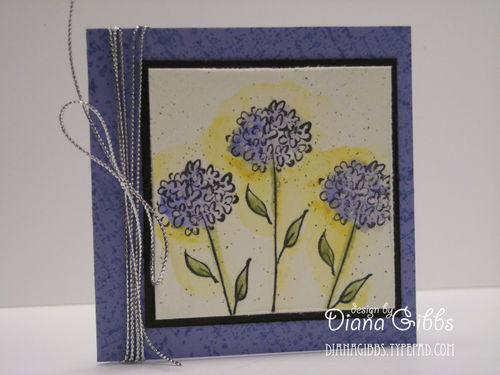 Anyway here it is.

It is hard to tell but there is silver zig painty pen speckled on the flowers, and that coordinates with the silver cord.

I also used the color spritzer tool and made the speckles all over the card.

Another card I found while I was going through my stash, is this cool one that my good friend Sharon (hey honey) made, and she had a knack for this technique, that I could not master.  This is actually one piece of cardstock, the whisper white I mean.  She ripped paper to protect areas while she stamped, and then moved the paper slightly and sponged a little bit of gray to make it look like a shadow and then she would do each section.  Isn't this neat? 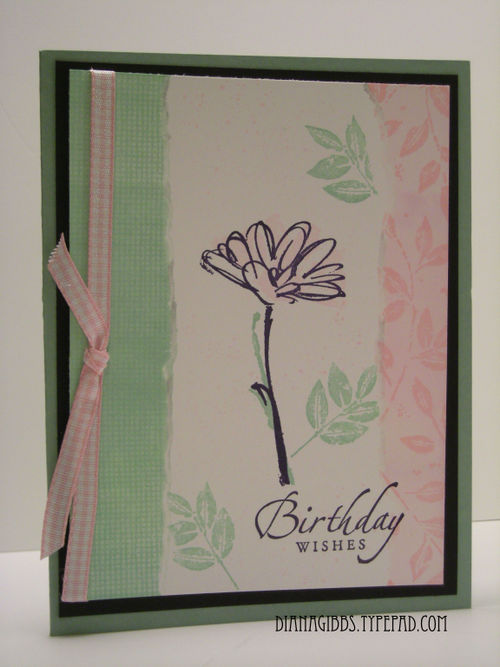 So you can tell by the cards I posted I was busy today working on stuff, I got a bunch of my display stamping done, and I feel good about that.

I will show you that stuff in February.

It is amazing how much work you can get done when you stay off the danged computer.

I did watch the CMA awards tonight, I think that Carrie Underwood and Brad Paisley did an excellent job hosting it, they were very professional and acted so grown up. Billy Ray and Mylie Cyrus on the other hand, forgive me Hanna Montana fans, they drive me bonkers.  I was like just read the winner already and get off the stage. And then George Strait, (love him), and he won a few times, but do you think he really wanted that Tony Brown going up on stage with him each time…my gosh the last time George won, he stands up and here come Tony running down the aisle, and was like – (this is what I think was said) "here I am George old pal! – whew I just made it, I just had to take a phone call and it was a prank call no one was even there, I ran out and got my sunglasses from my car though" and George was thinking dagnabbit, (George is a gentlemen and did not say or think the "F" word) it didn't work, as he secretly closed his cell phone in his pocket and hung up! Ha!

Have a great Thursday, and thanks for stopping in!