Well I had good intentions of doing a tutorial, but time got away from me today, laundry, packing and making swaps. So please forgive me if I don't have one done.

I am so excited to go to Convention, and I leave in the morning. I will try to update and let you know what is going on, if there are computers to use at Convention, otherwise, it will be a quiet week from me.

I promise I have tons to show you when I get back!

Add Some Color For Flair

So this morning as I got ready for my treadmill trek, I try to walk a mile a day and a while ago I bought the TV series Reba to watch as I walk....I have told you that before. I turned the TV on while I was getting my shoes on and CMT was on and the video by Reba and Kenny Chesney "Every Other Weekend" came on.  I had never seen the video before only heard the song on the radio. I just assumed that Reba and Kenny would be on it. So as I was watching it, I see that the guy getting out of the car is Van and the girl in the other car is Cheyenne, these are the daughter and son in law from the TV series.  So then the kids get out of the Mum's car Cheyenne, and run to the Dad, Van. I am thinking No! No! No! Van and Cheyenne did not get a divorce.  Now I know it is all a TV show and I am sure that they are not playing Van and Cheyenne in the video, but that is what I am sure everyone is thinking, and that is what I am totally thinking....as I sit there and cry with one shoe on and one shoe in my lap.

So I am like whatever, I am watching Reba, and I'll be darned if the next dang show I watched was the one where Van and Cheyenne had their baby, and then I was crying again. So I am thinking Reba had better make a new video where they get back together, or she better let me know that they were not portraying Van and Cheyenne in the video, even though there was a girl and a little boy, the same as the show!!!

So I played around with this card, and I definitely like it better with some more color... 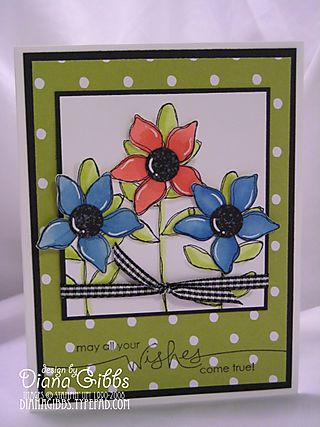 I colored the flowers with the new Riding Hood Red and Not Quite Navy, then I stamped on black cardstock with white craft ink with Itty Bitty Backgrounds a bunch of times to get a bunch of little dots and then punched them out with the 1/2" circle punch and added a gel pen highlight and it changed the look of the flowers.

Now to get all my swap cards done tomorrow, and my gifties...plus I really would like to get a tutorial done for you for Tuesday, even though I will be in SLC.

So tomorrow is gonna be busy...oh yeah, and pack!

Not Too Sure About This One

3 more sleeps! and I will be in Salt Lake City with my BFF Tracy, and a whole bunch of our other girlfriends having a blast.

So I am trying to get the rest of my swap cards done, and a few gifties! 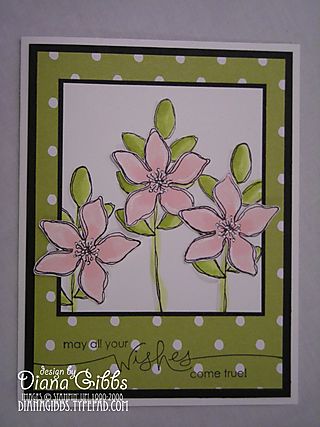 This is a card I cased off of Cindy Lawrence www.onehappystamper.typepad.com and I must say hers is way better.  I wanted to use the new Bella Rose DSP, and I do like it, but I am gonna color the flowers a different color and stamp them on watercolor paper and cut them out instead of whisper white like I used here.  I think I will like it better and they will be sturdier.

Have a super Saturday, and thanks for stopping in!

So last night we had a pretty wild lightning storm so I shut everything down early and did not get my post done, so here it is...better late then never, even though this looks better in person.

I was actually glad to go to bed early, I am SOOO enjoying reading Twilight. OMG!  I don't want to stop, and it has been a longggggggg time since I have read a book that I was so excited to get back to it, and that says a lot because I read all the time. 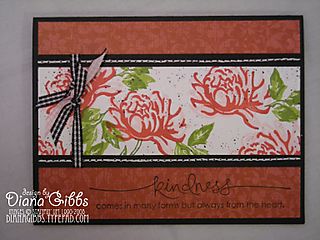 So here is another one of my swap cards, I had to do something a little quicker, cause after cutting out 25 monkeys and 100 bananas my fingers are killing me, (how sad I actually cut out three leaves, and a peony to pop, but after looking at it, I don't think it needs it.)  I wish I had some new In Color ribbons though, but alas, nada, zip, none, for another couple weeks!!!!  I still may switch out the pink for some sort of green though. If this was for a class I would put on one of the new buttons, but I am a little stingy with them for a swap card...I know bad Diana!

I love this set, it is my Roses in Winter wanna-be set!

What I used is:

So yesterday I was spinning the TV channels around and came across a show called Junk Brothers on HGTV. So basically these guys drive around and pick up people's trash and make it into something new and take it back.  Now I don't mean old diapers and stuff. They did something with an old ironing board, but that was ending as I turned it on. Then they found an old dining table with 4 chairs. So they turned it into like a hutch with drawers, it was pretty awesome.  So they take it back, ring the doorbell and watch the family come out, and the kids are excited and so is the hubby but the wife I don't think she smiled once.  Cause you know what I am thinking? Sure you do...sit down while I tell you a story..Once upon a time...ok just kidding but....I think it was either 1.) the ex-wife's table and chair set or 2.) the mother in law from H E double hockeysticks table and chair set, and the new wife had been secretly wiping it down with bleach, smacking it with a hammer and loosening the screws and complaining "get this out of my house, it is a danger to the children" so the hubby finally agrees and reluctantly puts it out on the curb, kissing it goodbye, remembering the good times he had on the table...now you will have to decide  1.) where the table came from (see choices above) and 2.) decide what happened on the table....only to find out the Junk Brother Fairies came in the middle of the night and re-finished it as good as new, in a new found use, and it is back in the house again.   Now of course this is just in my twisted mind, but makes the story seem much more fun, doesn't it?  So my tip for the day, if you are trying to get something out of your house you don't want refurbished and brought back to haunt you till you die, (taunting you silently -"he loves me more") I suggest you totally dismantle, cut up, throw in a dumpster somewhere else, or.....it will be back....(play Twilight Zone music here)

Nothing beats a good pedicure, except getting a pedicure with a good friend. 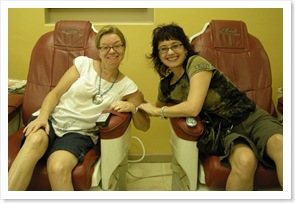 Ain't we cute?  And if you think we are cute, check out our tootsies! 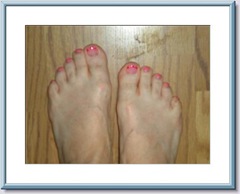 These are Sharon's - Pink tips with black polka-dots! I forgot to take a picture of them, so Sharon sent me a picture from home. 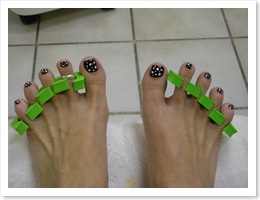 These are mine, obviously while they were still drying. Ha!

I just went all black with white polka-dots!

It's all about the dots man!! 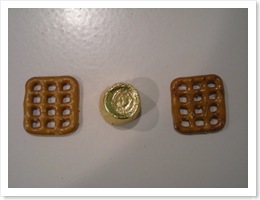 Then I came home and made Sharon's snack....nothing like shots of feet right next to food is there? Yum!

Yummy Goodness......I don't know what they are called, but they are so good.  I have also added a pecan on top instead of the other pretzel, then they are turtle-ish. 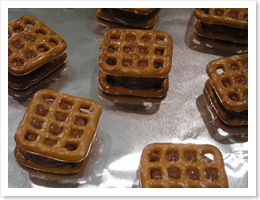 You just heat the oven to 250 degrees, and put one UNWRAPPED Rolo on top of the pretzel.  Cook for 4 minutes, take them out, and then put another pretzel on top, and push down slightly, you can put them in the fridge to harden up.

I swear it takes longer to unwrap them then it does to eat them! Ha!

Look for me in Salt Lake City, I'll be the Demonstrator at convention, with the zits all over her face....ha!

Well I got a headache, so I am headed to bed!