What ever are you drinking in your Coca-Cola cup?  OMG!  Jeff and I were laughing so hard, I mean Jeff got out of his chair and I thought he was gonna have a cramp. Jeff was like "ya gotta blog it!" So here goes honey....

Somehow Paula was critiquing two songs sang by I think it was Jason, and we were like "what? he only sang one"  Even Ryan, Simon and Randy were like "ummm...what the heck is she talking about?" I mean this show is really going down hill, this HAS to be the last season, I mean why should we listen to the judges, they obviously don't know what the heck they are talking about. I mean heck Paula was commenting on a song that had not even been sung.  We were laughing and pretending that Paula was calling David Cook, Chris Daughtrey from another season, and telling him how glad she was he let his hair grow....hey it don't take much to amuse us.  I was all excited that the judges were not gonna be able to talk till after the two songs were sang, and then Ryan asked them a question....well I bet he is kicking himself now isn't he?  Well I am gonna guess that Jason is going home, he was the weakest of the 5.

Ok enough American Idol, how about an awesome Meatloaf Recipe, and the best part is it is made in the crock pot.  I got this recipe out of a Gooseberry Patch Recipe book.

*I double these ingredients.

Let me know what you think...we love it!  And when you are stamping all day, it sure makes it nice to have supper cooked for you.

I will post just something silly and quick. I have a migraine or a stress headache and need to go lay down in the dark, so here goes: 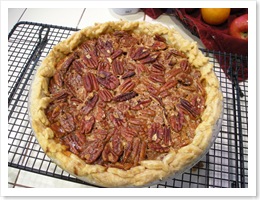 We have a family friend (Hi Lee!) who loves my pecan pie and so for his birthday last year, this is the pie I made him, and I used an aspic, I think it is called to make the little leaves that I put on the crust...yeah...call me Betty Crocker...I have been called worse. 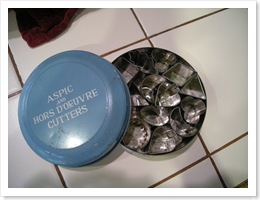 Here is the little thing that made the leaves, I think it is for making little sandwiches or something.

What is funny is that the recipe I use is right off the caro syrup jar, I just add more pecans....I keep telling everyone that, so they will make their own, but it does not work.

I do have an awesome pie crust recipe, maybe that is it.

Little Dawg on the Prairie

Yo Yo Dawg! American Idol's Randy has nothing on our Dawgs! I looked out the window today and saw one of our friends trimming one of the trees in the backyard. He wa s leaning way over trying to grab a piece of new growth.  I ran to get the camera but he had moved by the time I got back, but here are a couple shots of him.

They kinda remind me of a Lemur, I call them prairie dogs, and Jeff calls them ground squirrels, I really don't know what they are, but they can be fun to watch. 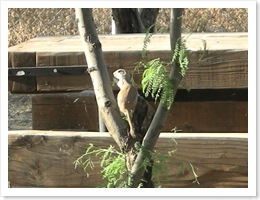 I wanted to get my post out early tonight, as I have a long night ahead of me getting stuff ready to send to Stampin' Up! as I have a deadline and it is right around the corner.

Have a super Monday, and thanks for stopping in!

Jeff is coming home from Turkey hunting, so I will let you know if he gets anything. I always tease him and tell him when I go to the store for steak, I come home with steak, unlike when he goes hunting for a deer, he does not always come home with a deer.  He just comes home TO his DEAR! Ha!!  I think that is why we get along so well and he is so supportive of my Stampin' Up! business, because he also has something that he loves to do.

One of the things I did after we got home from our cruise last year, was I made up this jar. I had found this big huge clump of sand when we were in the Bahamas, I first thought it was a rock, so I brought it home with some shells and sand dollars that we found while snorkeling.  I just smashed the sand up loose, added the shells, I put a rub-on on the jar, just recently, and now it is a jar full of memories.

I have a bunch of these jars, you can find them at Micheals and they have many different sizes, you can keep anything in them, ribbons, buttons, Flower Fusions etc. In fact I have one that is filled with fake snow, and when it is 120 degrees it is kinda nice to look at. 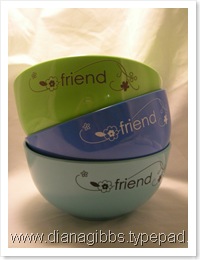 We have our Annual Arizona Spring Fling coming up, and so I wanted to do some fun quick center pieces for the tables.

Walmart had these adorable bowls, and I had some Sale-a-Bration Rub-ons left over, and rub, rub, rub and Ta Da! Aren't these adorable?  We will fill them with goodies and they will make the tables look so Springy, don't ya think? 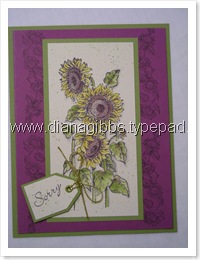 While I have been busy working on display stamping for Convention, I went through some old cards, to get some ideas, and be inspired.  This was one of my old favorite stamp set, "Sunflower Serenade". Beautiful!

My Downline meeting is tomorrow, and the DIVA's will be stamping their cards afterwards, and I have a studio that really needs to be tidied up, there is a bunch of stuff that needs to be hidden away, so I best get my butt off here and get busy.

You like me, you really like me! Remember that awards show where Sally Field was saying that?  I really like her, and I do enjoy watching the show Brothers and Sisters, but that darn strike got me all messed up with my TV watching, in fact Jeff and I sat down the other night all excited that House was on, we had our drinks and our popcorn, and it was a stupid repeat. Geesh!

I was watching HGTV today and watching House Hunters, and this man oh my gosh if he was my real estate agent, I would have fired him.  I mean, I know it is all a TV show but he showed the girl two houses that were totally not what she was looking for, then he would say "what do you think?" meanwhile the whole time she was like, the bathroom is too small, the yard is too small, I don't like this or that, and I just wanted to slap him up side the head.  But while the show was on there was this funny commercial for Black & Decker and the man was like painting the house, and he was getting mad and he would flick his hand back and he flicked paint on his wife's dress, then it shows him drying dishes and he does it again, slam the plate goes smashing behind him against the wall, and basically it is a commercial for a new tool, instead of buying the old pull string mowers, and trimmer things that you pull and pull it is some battery thing...but I thought it was hilarious.  It reminded me of the commercials that are for things that are automatic, like you talk to your phone and it dials, you tell your radio what to play it plays it, and you don't have to touch it. It shows the girl saying "door open" and the door of course does not open and she walks into it and spills coffee all over, the guy says "blinds closed", and strips naked in front of the window and his neighbor sees cause the blinds don't close. The funniest of all in that commercial is the guy in surgery and the doctor is like "anesthesia on", and he is starting surgery and the patient starts yelling " anesthesia on!" those are fun commercials.  I would love to be in the meetings when they make a commercial. In fact Stampin' Up! has a contest for demonstrators to make up a commercial spoof and send it in and they will show them at Convention, if my BFF Tracy lived here I think we could do it. Can't ya see us yelling at our stamp and ink pad "ink on!"

I watched Ellen today, can you believe 800 shows, I had no idea she has been on for 5 years, I mean where was I?  That can't be right? She is hilarious, I used to watch Oprah or at least turn it on to see who was on, but Ellen is just fun and not so depressing, plus she seems so sincere and sometimes Oprah...well...just doesn't. 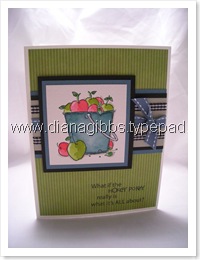 I wanted to show the make n take for my meeting on Sunday.  I know...I know, it is those darned apples again from Give Thanks, but I love them.  Plus I love the stamp set Smarty Pants for the fun greetings and wanted to use that too.

So back to thanking the Academy, I won an award today, I actually won it last week from Jamie Sears htt

p://stampinmommyof4.blogspot.com and did not know what to do, so I am hoping I am going to do this right.

I have been given the fabulous Arte y pico Award from my sweetie and fellow INKredible gal Cindy Lawrence. - the clock's tickin' honey!!!

You can check out Cindy's blog here : http://onehappystamper.typepad.com -she is so talented, and I treasure her as one of my friends.

This award is given to bloggers who share their art and creativity making their contribution to the blogging world. Here are the rules:

a. Choose five blogs that you consider deserving of this award for their creativity, design, interesting material, and also contribute to the blogging community, no matter what language.

b. Each award has to have the name of the author and also a link to his or her blog to be visited by everyone.

c. Each award winner has to show the award and put the name and the link to the blog that has given her or him the award itself.

d. Award-winner and the one who has given the prize have to show the link of Arte y Pico blog, so everyone will know the origin of this award.

Here are my picks:

Patty Bennett: Patty is my inspiration to how I want my Blog to be, she was so helpful when I was trying to decide what kind of blog to get...check her out...and take a cup of coffee you may be there a while.  http://pattystamps.typepad.com

Jacqui Lines: Jacqui is my little sister and she has just started a blog, she is also a Stampin' Up! Demonstrator, but she is a Canadian one. I miss her and can hardly wait to see her in a month!   http://sisterlines.blogspot.com

Vicki Garrett: I have never met Vicki in person, not yet anyway. She is so talented, and I always invite her when I do a side swap with my team.  She is one of Jacqui's best friends. See ya in May Vicki!  http://summerthymestudio.blogspot.com

Jody Morrow: She always has fun ideas, and makes me think out of the box. http://confessionsofaribbonaddict.blogspot.com

Tracy Altemose: She does not have a blog yet, but when she does it will be one I go to all the time.

5 was hard to pick and I did not want to pick people that Cindy had on her list.
So I hope I did it right.

Back to work, thanks for stopping in!